In May, 2007, I finally took my Ford GT to the popular “Cars and Coffee” PAG car show in South Orange County. At that time this show was 100 miles from my house, and you had to be there by 6 a.m. to get a parking spot, so it required getting up at 4 a.m. Ironically, now I live 5 miles from this show…but it stopped happening about a year after I moved to Orange County (boo!). That month I also wrestled with weak Sirius satellite radio reception (this was pre-SiriusXM merger) and a low idle speed with occasional engine stalling. The odometer turned over 8,800 miles. 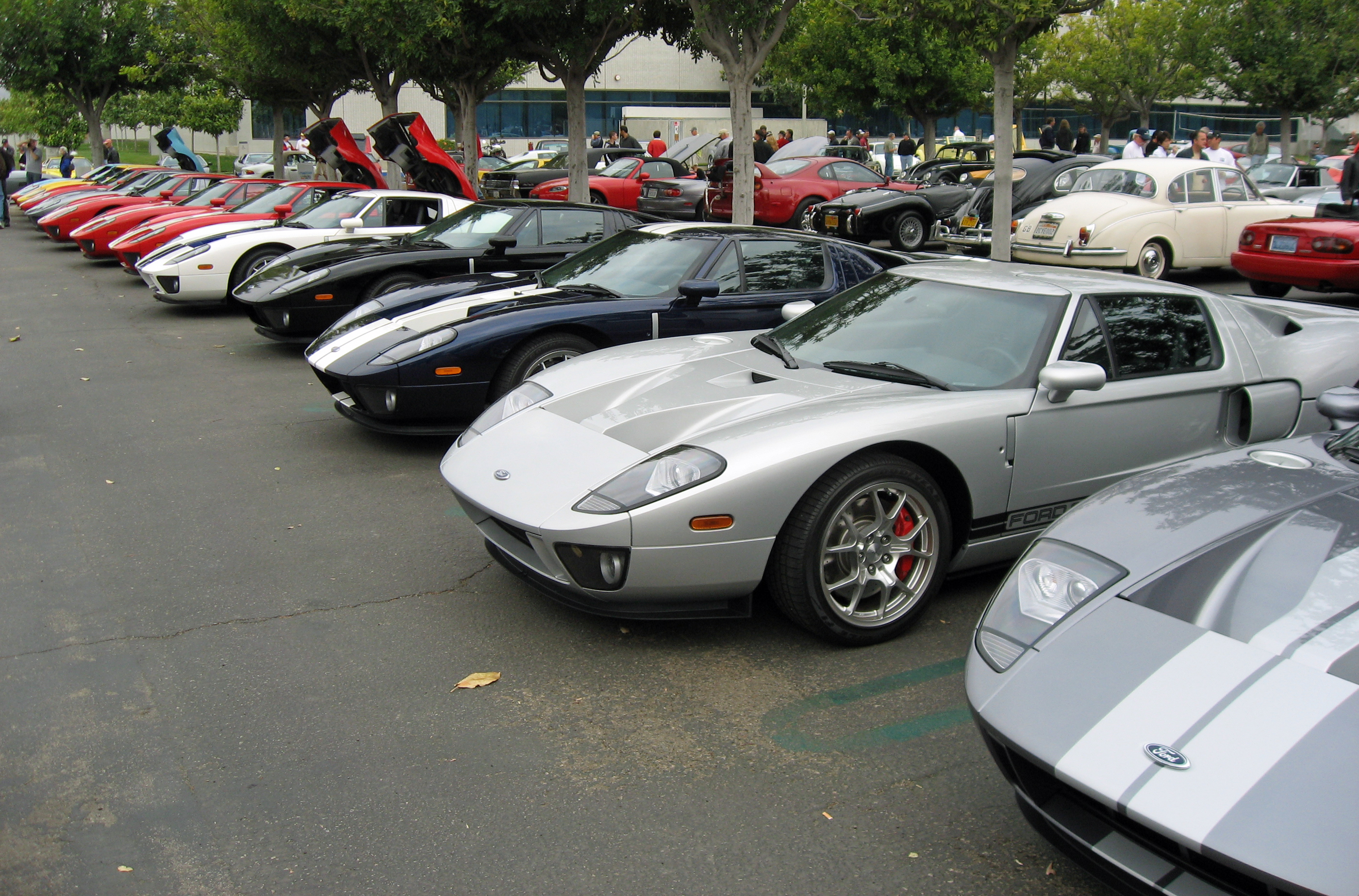 One of the best Southern California car shows happens every Saturday morning in the parking lot of Ford’s Premier Automotive Group headquarters in Irvine. While the weekly show — dubbed “Cars and Coffee” — takes place at a Ford property a wide variety of vehicles show up and the weekly “theme” for the show can range from Ferrari to Chevrolet. But this past Saturday the theme was indeed “Powered by Ford” and as expected a goodly number of Blue Oval iron showed up. Included in the festivities was a collection of 20 Ford GTs, one of which being my Midnight Blue model. All eight Ford GT colors were represented, though ours was the only blue one on site (there were several red, a couple black and Tungsten, and one each in white, yellow, silver and the Heritage colors).

Of all the Fords on hand my favorite (after the GT, of course) was a 1970 Boss 429 Mustang in Grabber Blue with a white interior. It looked all original and had a four-speed “T-handle” jutting out of the center console. I consider these cars the “Superbird” of Ford’s muscle car era, and would love to pick one up (if it wasn’t for that pesky $200,000 price tag on most of them these days…). Plenty of Porsches (including one Carrera GT), Corvettes (several 427s) and even some vintage Mercedes (saw a Gullwing) were running about, too. Considering the price of admission (FREE), the collection of rare cars at this car show is never a disappointment. If you’re in the vicinity stop by some Saturday morning between 7 and 9 a.m. 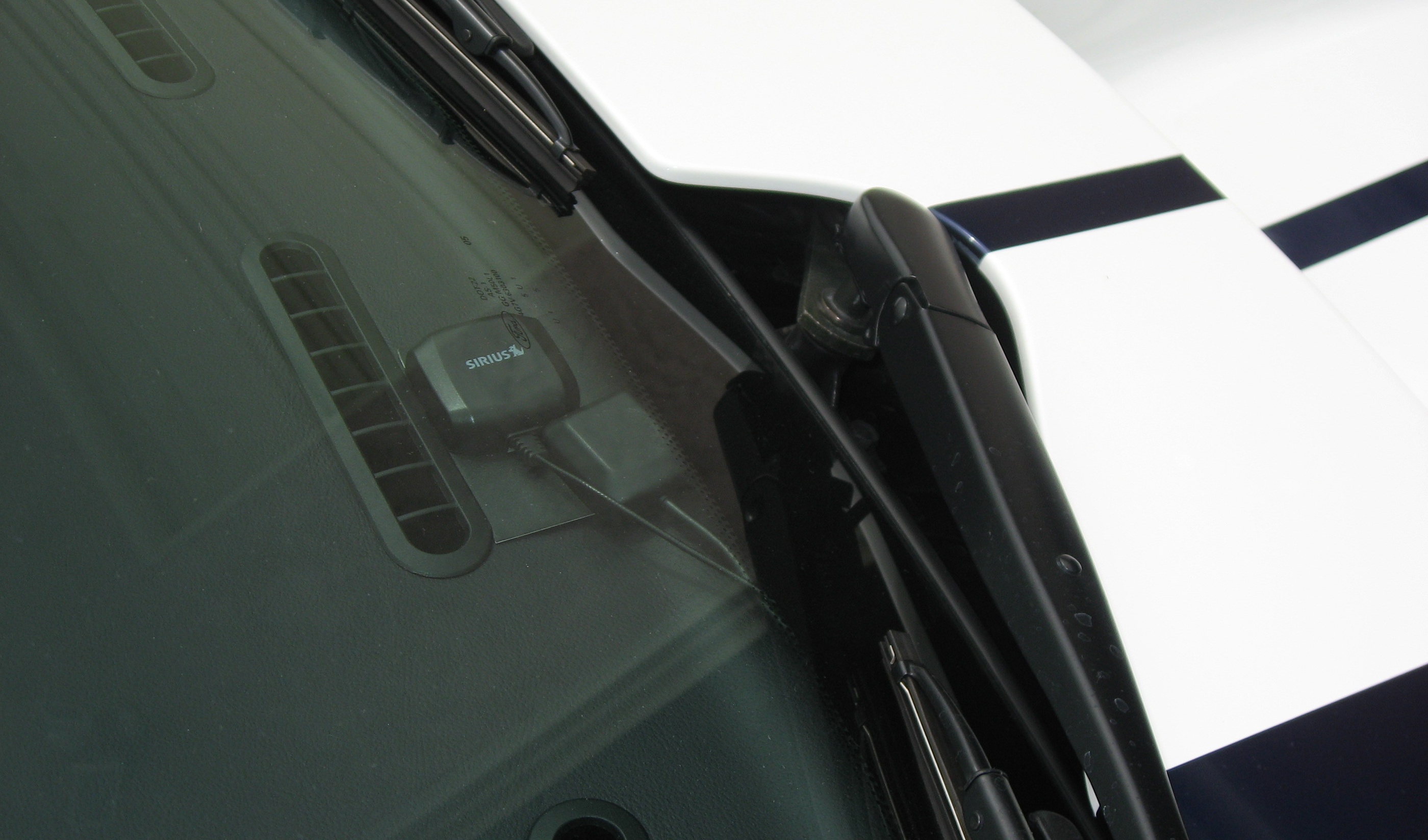 Reception for my Sirius satellite radio was less than stellar

At 8,700 miles the problems with the GT have been, gratefully, few and far between. There were two recent scares, but both proved non-GT related.

First, the reception from the Sirius satellite radio has been cutting out, even moreso than usual. I generally like Sirius’ radio programming more than XM’s, but XM has it all over Sirius when it comes to signal strength. Of course they are one-in-the-same now, so maybe Sirius’ signal will get stronger (but will the quality of their programming get weaker…). Anyway, I feared the placement of the antenna was causing the issue, as I didn’t want to mount it on the outside of the car and hoped the dash-mounted location would be good enough. Well, the day after driving the GT and having massive signal drop out I drove another test car with Sirius radio and suffered the exact same level of drop out in the exact same places on my commute. Obviously the problem is Sirius, versus a serious problem with my receiver or antenna placement.

The other problem had to do with ride quality at freeway speeds. It felt like one or more of the GT’s wheels were out of balance, as there was a weird, intermittent vibration between 60 and 80 mph. I wanted to believe it was related to the road quality, but it happened over a large section of L.A. freeway. Well, just yesterday I drove a BMW 335i coupe over the same stretch of L.A. freeway and felt the exact same intermittant vibration for approximately 15 miles (it’s the 101 southbound just north of the 405 interchange). Like Sirius, Los Angeles really needs to upgrade its equipment.

Maybe it’s the Ford GT’s exotic nature that makes one assume the worst when an apparent problem arises. But after 8,700 essentially trouble-free miles perhaps it’s time to start assuming the best. 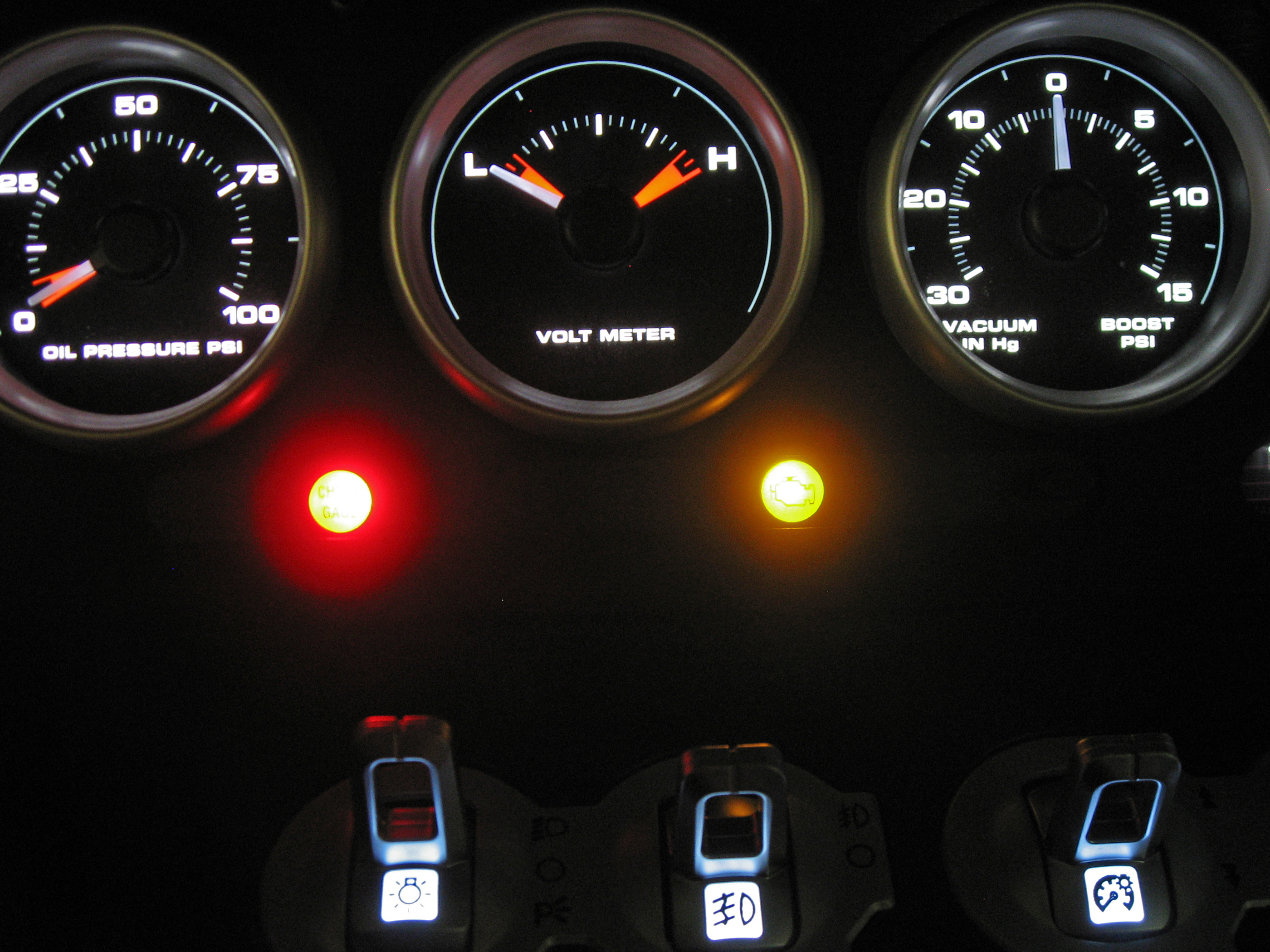 2005 Ford GT Fuel Mileage Up but Idle Speed Down

Of course you know what happens when you claim your car is problem free, right? After blogging on Monday about how dependable the Ford GT has been for its first 8,700 miles I confirmed a definite problem during today’s lunch run up PCH. Over the approximately 20-mile drive the GT stalled twice while stopping, leaving me staring at the “Check Gauges” and “Check Engine” lights. I just read through the TSB list and there’s nothing regarding an engine stall at low speeds, but going through the Ford GT forum boards I found several mentions of the problem.

Apparently the fuel-filler tube can develop a crack or other sealing issue. This disrupts the vacuum reading in the fuel system, which confuses the ECU, which causes the idle to drop and the engine to stall. The forum members mentioned that having A/C on makes it worse, and guess what I was using during this sunny and hot drive at lunch time? Of course the fix is all covered under warranty, but apparently half the front clip must be pulled in the process. Hmmm…maybe now is the time to replace the rock-chipped windshield, too (front clip has to come off for that as well).

On the plus side, I’ve updated the GT’s fuel log and the lifetime mileage has jumped from 16.09 mpg to 16.22 mpg. One tank even saw as much as 20.02 mpg. Maybe the car has heard all this CO2 and global warming talk and is just trying to do its part. 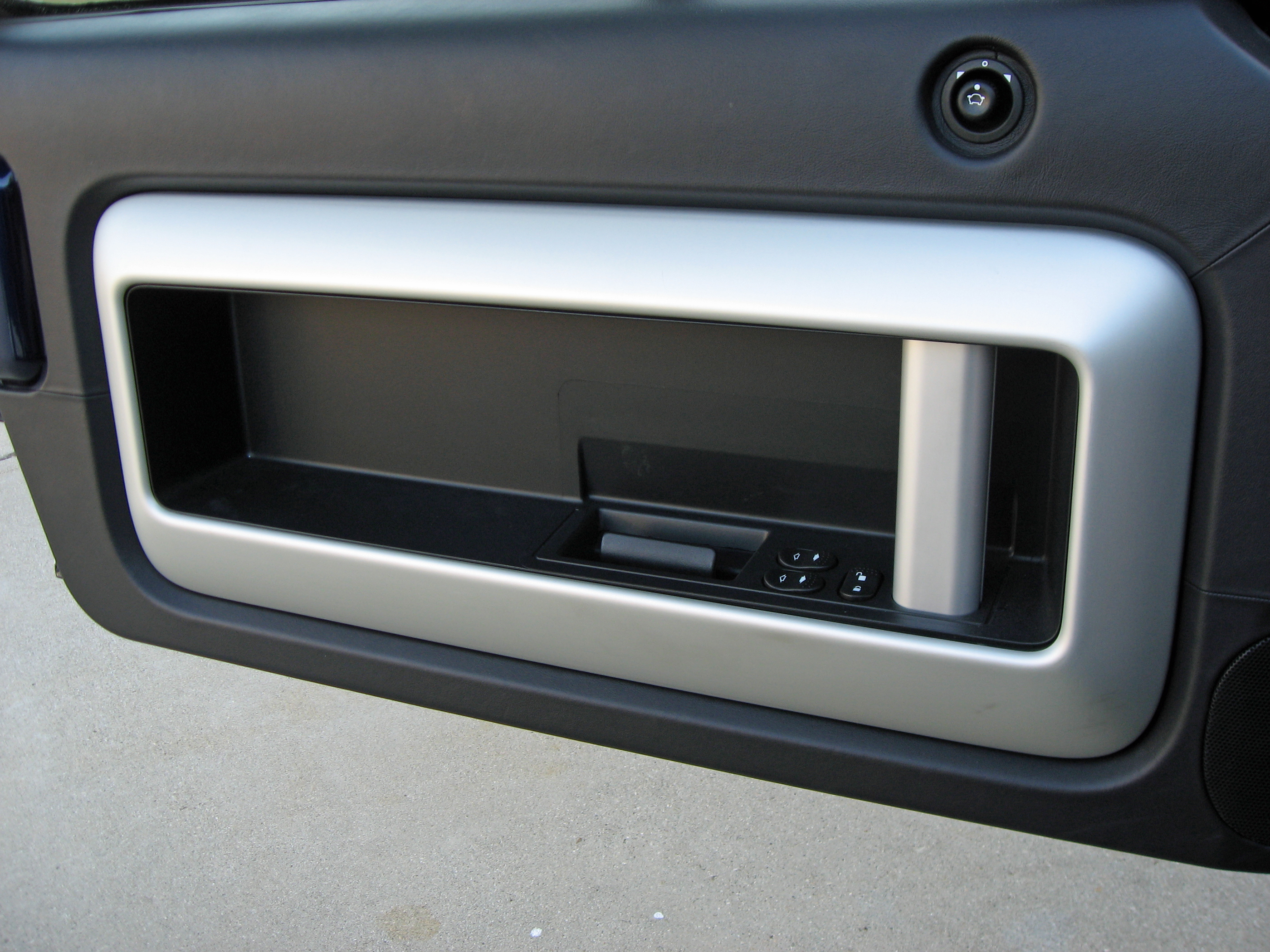 Ford GT Dealership Visit Will Have List of “To Do’s”

There have been some minor nagging issues with the GT, but none were serious enough to force a dealer visit. However, with the engine stalling about 50 percent of the time when slowing to a stop there’s no avoiding a dealer trip now. The list of services to be performed are:

In theory we could have the halfshaft bolts replaced as well, but at 8,700 miles with no problems it seems prudent to leave well enough alone. Most reports of bolt failure occurred within the first 2,500 miles (usually before 1,500), so it seems you either have this problem or you don’t, versus it being an inevitable issue. Of course, now that we’ve said that…