If I’m biased about the Ford GT it’s because my 2005 treated me so incredibly well for 13 years and 31,000 miles. When I received my 2005 Ford GT from Santa Monica Ford on August 23rd, 2005, it had 7 miles on the odometer. As I was driving back to Los Angeles from the new Ford GT press launch in Salt Lake City my car turned over 30,000 miles. This was in the middle of the night in the middle of Utah. To avoid LA traffic I left the Utah Motorsports Campus at 8 p.m. (after a long day of driving and shooting video) and got to my house at 4 a.m. 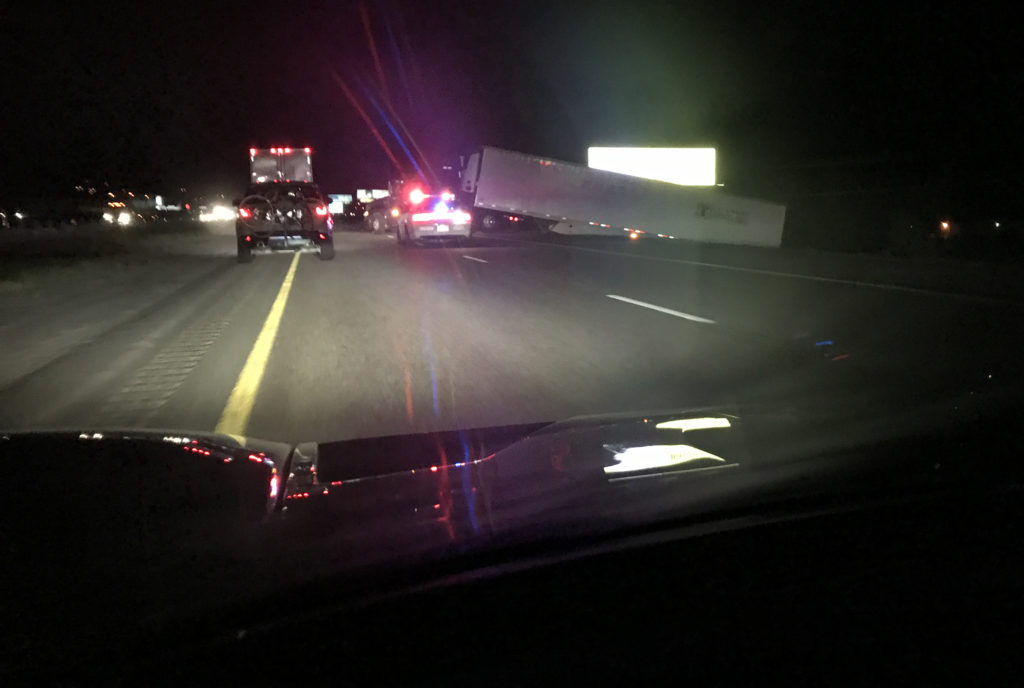 I mention all this to make it clear how I treated my 2005 Ford GT – which is exactly like any other car I’ve owned. I have no patience for temperamental, high-maintenance museum pieces. If a vehicle has four wheels and a license plate it’s portraying itself as a real car, and you can bet I’ll be treating it as such. Sadly, I’ve run across plenty of four-wheeled, license-plate-wearing vehicles that don’t live up to this expectation.

But the 2005 Ford GT is a real car. I know someone with almost 150,000 miles on his. On my trip to Utah and back, I drove through high wind gusts, multiple rainstorms, and even one hailstorm, which was a first for me in that car. But as usual, the GT didn’t flinch (or slide, or skate or do anything else a supercar might be expected to do when the road goes from dry to a sheet of hail in less than 45 seconds).

As a bonus, my 2005 Ford GT was driven on the Utah Motorsports Campus race course by factory Ford GT racing driver Billie Johnson. He was a lead development driver for the new Ford GT but hadn’t been in the previous version. I told him that was easy to solve and we suited up. After several laps, most of them pointed more sideways than straight, Billy officially blessed my 2005 Ford GT with full approval. “What a pure machine.” I could go on about the 2005 Ford GT’s traits for several thousand words, but for the sake of efficiency I’m going to hit the primary points and then get on with comparing it to the new Ford GT.

The older GT’s steering is very precise while offering a high level of feedback. It’s not quite at Ferrari or Porsche levels in terms of communication, but it’s close, inspiring confidence and making the car easy to drive at high speeds on either a track or public road. The Ricardo 6-speed manual transmission is one of the best three-pedal transmissions ever created. Its throws are quick and intuitive while requiring little effort. The same can be said of clutch pressure and pedal layout – there’s plenty of room in the footwell and clutch pedal pressure is on par with a modern Mustang GT or BMW sedan. Pedal placement makes heel-and-toeing a breeze.

Combine the 2005 Ford GT’s primary controls with its wide, torque-rich powerband and you have a supercar that’s super easy to flog. The 5.4-liter supercharged V8 features an aluminum block and heads, a dry sump oil system and, on my car, a Ford Performance/Borla exhaust system making beautiful music out of the engine’s 550 horsepower and 500 pound-feet of torque.

In the mid 2000s the Ford GT was one of the fastest cars you could buy, and a modified 2006 Ford GT (making 2,000 horsepower) currently holds the world record for the Texas Mile at over 300 mph. Clearly the car offers plenty of performance, in both stock or modified form. But fixating on the car’s numbers misses what I consider to be its most compelling traits. These include durability, low-maintenance, low operating costs, high comfort and stunning looks that will never go out of style. In 100 years the 2005 Ford GT will still be considered one of the most attractive cars ever made (humans will gaze longingly at photos of it…from their autonomously-driven sensory-depravation chambers…).

However, in the context of the 2017 Ford GT, the 2005’s most important point remains its effective primary controls and how those translate into confident driving dynamics. I refer to my GT as a “sweetheart” because it inspires playfulness and treats you right. Oh you can crash it, and plenty of people have, but any supercar will do that if you don’t respect its power. What’s unique about the 2005 Ford GT is the level of communication it offers through its steering wheel, shifter and seat of the pants. Take the time to listen and it will tell you how to confidently drive it fast while enjoying the occasional rear-wheel or four-wheel drift.

The fact that Ford created the 2005-2006 GT at all, let alone under the compressed timeframe and financial strains the company faced in the mid-2000s, makes it all the more incredible. It also explains why the cars have only gone up in value since production ended in October of 2006.

The 2005 and 2006 Ford GT’s execution set a pretty high bar for any successor to clear, so it’s important to remember what Ford wants out of the new Ford GT when comparing the two. Unlike the last version, which was a street car meant to honor the legendary GT40, the new Ford GT was built with one purpose in mind: to win races. Specifically, it was built to win the 24 hours of Le Mans in 2016, 50 years after the original Ford GT40 won that race for the first time. If you follow professional racing you already know the new GT has accomplished its mission, placing 1st, 3rdand 4that the 2016 24 Hours of Le Mans.

What does that mean for the new Ford GT street car? Couldn’t Ford simply enjoy its anniversary win, pull the plug on this program and get back to selling high-profit trucks and SUVs? Actually, no. To keep the Le Mans trophy Ford has to sell street versions of the new GT, and (thankfully) Ford continued racing the car while selling approximately 1,350 street versions over 4 years. The new Ford GT costs approximately $500,000, and only qualified buyers have an option to buy one through a custom-ordered concierge program. That’s an awfully big price tag, even for a car with as much racing equity as the new Ford GT. Is it worth it?

The short answer to that question is yes. As someone on the hook for a new Ford GT I attended the car’s press launch with an extra bit of interest in its execution. My first impression confirmed what Ford has been saying about the new GT – it’s a slightly defanged racecar for the street. Everything from the 100 percent carbon-fiber tub and body panels to the carbon ceramic brakes to the tight interior dimensions and fixed driver’s seat is engineered for performance. If you’re thinking the new Ford GT is another grand touring car, like the 2005-2006 version, you’re going to be disappointed.

However, when viewed as the street-legal racecar it is, the new Ford GT is surprisingly accommodating. Ride quality, for instance, benefits from what is arguably the most advanced piece of technology on the supercar. The GT’s pushrod suspension offers five driver modes and a ride height ranging from 4.70 to 2.75 inches. When driven in “Wet” or “Normal” or “Sport” mode the GT stays at 4.7 inches and is nearly as forgiving as an Aston Martin or Corvette in terms of ride quality.

Placing it in “Track” or “V-MAX” mode instantly drops the car nearly 2 inches and tightens things up considerably. This dramatic shift is possible because the pushrod suspension effectively removes one of the springs in “Track” and “V-Max” mode, leaving an electronically-adjusted damper and torsion bar to manage the new GT’s dynamic behavior. This same technology also provides an instantaneous front-end lift setting when entering driveways or crossing uneven roadways.

Another nod to real-world driving is the Getrag dual-clutch 7-speed transmission. Unlike the previous Ford GT, which only came with a six-speed manual transmission, the new Ford GT can be effortlessly driven in stop-and-go traffic in full “automatic” mode. In this setting gear swaps are quick and seamless, at least in “Wet” and “Normal” mode. Putting the GT in “Sport” or “Track” or “V-Max” mode will have the transmission holding gears to improve power and acceleration, and pressing the “M” button on the center console’s gear selector will let the driver rapidly fire off upshifts and downshifts through paddle shifters ahead of the steering wheel.

Wrong. The new Ford GT is a race car. There’s no getting around it, especially once you get into it.

For instance, the driver’s seat is not only fixed in place but snugly located next to the passenger seat. Two NFL linebackers will not fit in this car simultaneously, and even Calvin Klein models should take turns buckling up to avoid hand/seat belt collisions. The driver’s seat doesn’t move because Ford wanted to ensure optimal front-to-rear weight distribution and control placement. Instead, the steering wheel (with its 16 control points) and pedals move to meet drivers of varying size, and even then a driver over 6’4″ is going to be brushing up against the GT’s leather headliner. And, regardless of height, if you’re carrying much more than 200 pounds you might want to sit in a new Ford GT before deciding you have to have one…

These tight dimensions reflect the GT’s narrow passenger tub sitting just ahead of the narrow 3.5-liter EcoBoost V6. This engine is a twin-turbocharged, dry-sump aluminum block rated at 647 horsepower at 6,250 rpm and 550 pound-feet of torque at 5,900 rpm. Its narrow profile is a key part of the GT’s aerodynamic strategy, allowing the body to rapidly close in around the passenger cell while leaving space for large air intakes and a cold air passage through the GT’s dramatic flying buttresses. Combined with the active rear spoiler and front grille openings the new Ford GT can provide substantial downforce in “Track” mode or maximum airflow in “V-Max” mode – a setting that lets it hit 216 mph.

More impressive than its top speed is the right-now! nature of the V6 engine’s power delivery. When placed in “Sport” or “Track” or “V-Max” mode the twin turbos are kept spooled up at all times, ready to deliver forward thrust instantaneously and imbuing the small engine with big-block, muscle car-like throttle response (not to mention a zero-to-60 time below 3 seconds). The engine also sounds glorious, offering a throaty, powerful exhaust tone that reverberates throughout the passenger compartment. In fact, if there’s an element of the new Ford GT that might keep drivers from using it for long-distance travel it’s the decibel level inside the cabin at highway speeds. Ford could dampen that noise with additional sound deadening, but that would upset the Ford GT’s svelte 3,100 pound curb weight.

Exhaust tone aside, it’s likely most of these cars will end up sitting stationary most of the time, despite Ford’s effort to avoid such a fate through the company’s allocation system. What a shame, because the new Ford GT compares favorably with the 2005 Ford GT and its most compelling trait – sweetheart driving dynamics. When driven at its limit the new GT provides exceptional feedback through laser-precision hydraulic steering and a snug driver’s seat. Push it hard and you’ll know exactly what’s going on at each corner. Reduce (or eliminate) the car’s traction and stability control nannies, then listen carefully as it tells you how to slide the rear out before reeling it back in. Just be mindful of the speedo. This car hits multiples of street legal speed very quickly.

Of course enjoying a $500,000-plus supercar to that extent won’t work for everyone, but I hope I’m not the only owner basking in the new Ford GT’s playful nature.