July of 2008 was a big month for my Ford GT. I planned a road trip to Denver for my 20-year high-school reunion, and what better way to arrive than in the only mid-engine V8 sports car ever built in America? I had to get new tires, do a thorough wash and wax, and get very creative in packing, but the car delivered my wife and I to Denver and back in flawless style — all while delivering impressive fuel mileage, too. 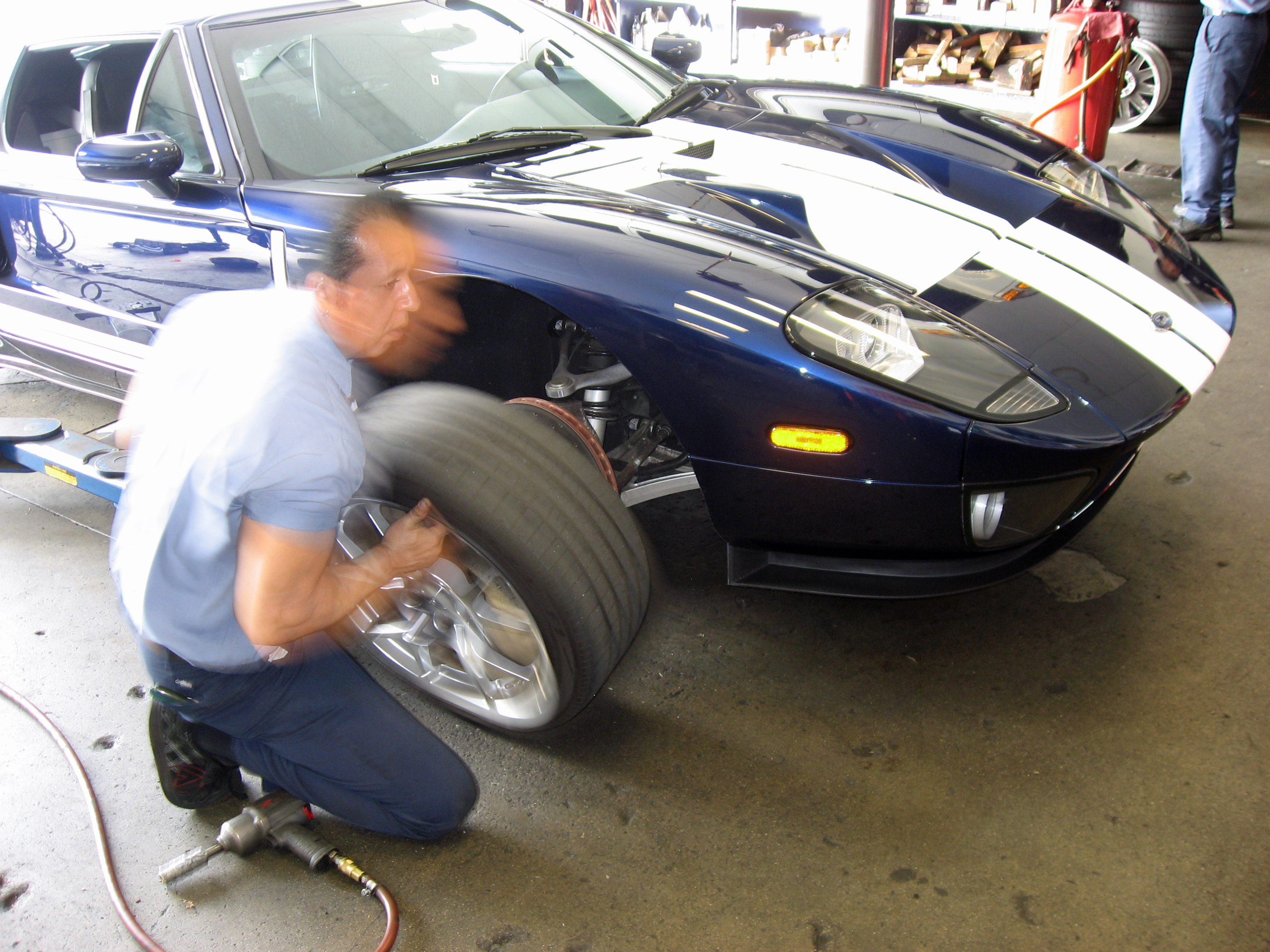 The Ford GT’s tires needed replaced before a long trip

July 2008: Where the Ford GT’s Rubber Meets the Road Trip

With a 2000-plus-mile road trip approaching in less than 2 weeks it was time to address the GT’s tire status. It was clear the rears needed replaced. They seem to average about 7,000 miles, and the odo was at 13,400 on the second set. However, the fronts were original, and hadn’t quite reached the wear bars. 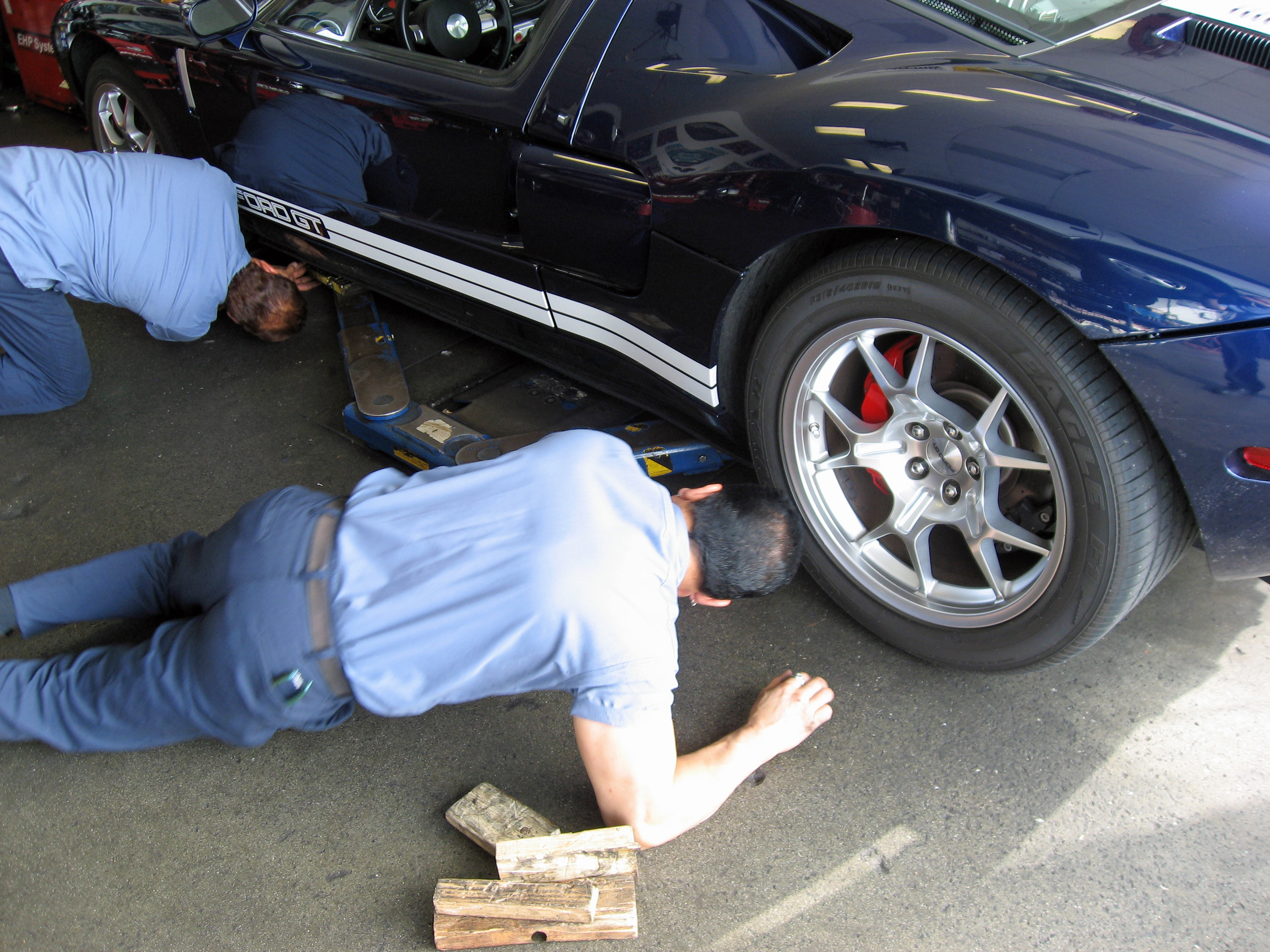 As with any tire work the first order of business is to get the car elevated, but the GT’s underbody pans make that tricky. Jack the car up from the wrong points and you’ll crunch the pans (I’ve seen and heard many stories of underbody damage from GT’s being incorrectly lifted). The experts at Stokes Tire Pros in Santa Monica took a close look under the car, confirmed their lift couldn’t reach all four points at once, and decided to life each axle separately. 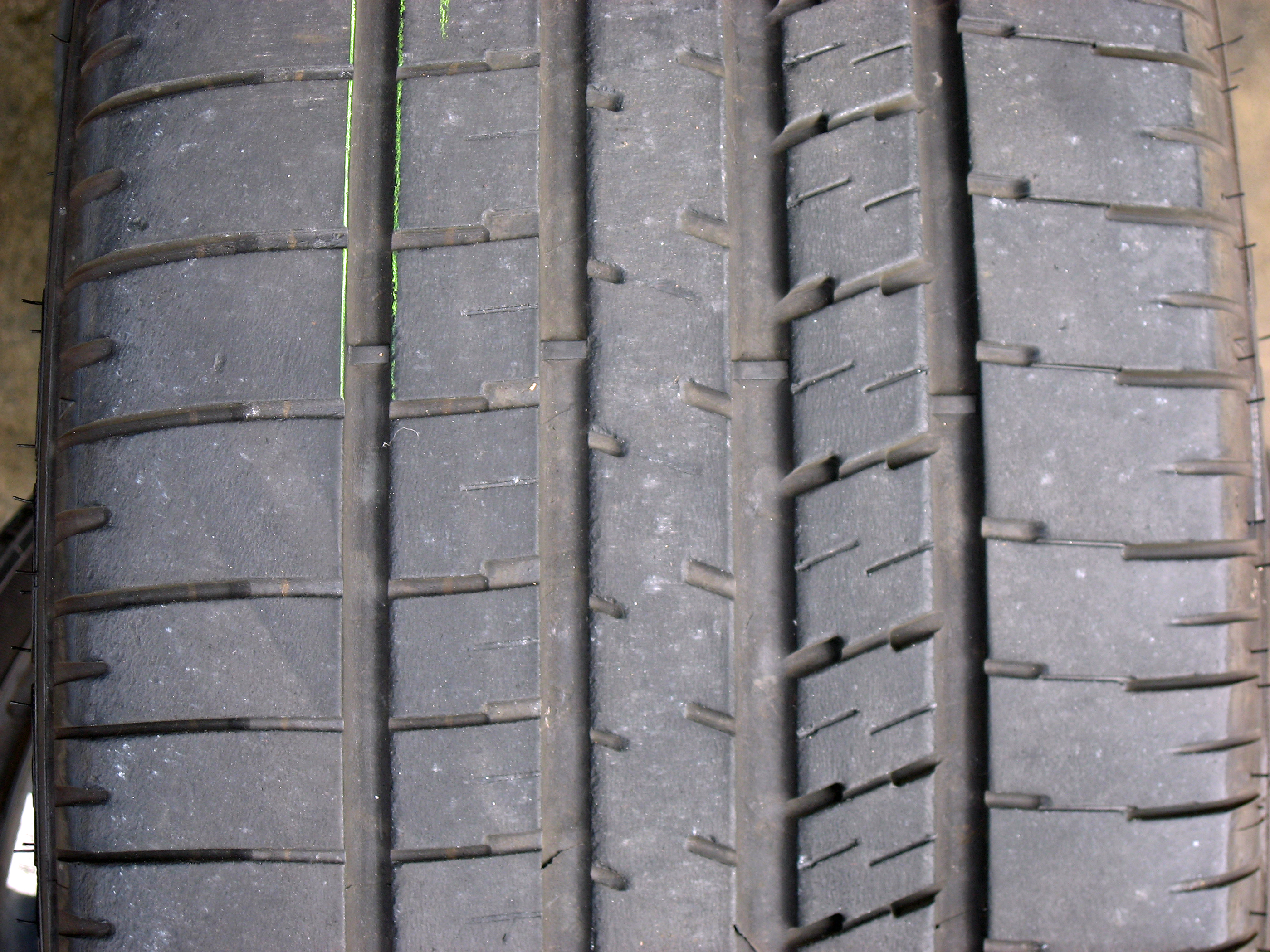 After a close inspection of the front tires Stokes estimated they were good for approximately 1,500 to 2000 miles. But it’s 1,000 miles each way to Denver, not to mention driving around once I get there. Better safe than sorry, so the fronts were replaced along with the rears. Their tire experts confirmed slightly high tire pressure, causing a bit of additional wear to the center of the tread.

Yup, it’s true. I have a bad habit of going 1-3 pounds over factory psi settings because I prefer the increased feedback and steering response, even with a slight hit to ride quality. Doing this didn’t take any appreciable life from the tires, yet seeing the wear has convinced me to go with factory pressure specs for the GT from now on. I’m loosing a bit of the car’s grip by having the center protrude and the sides slightly curve away from the pavement. 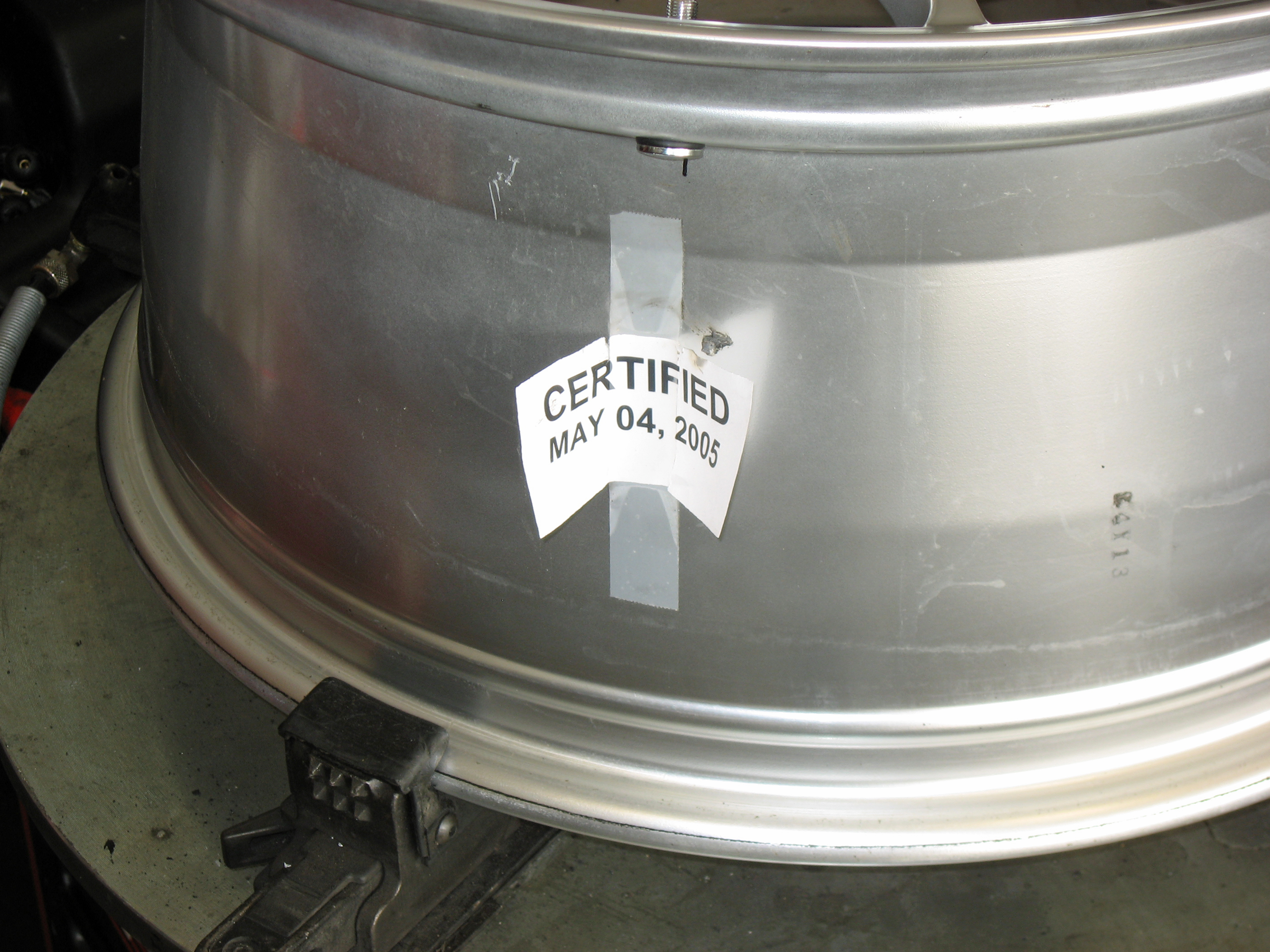 One interesting aspect of the front tire replacement related to a note taped to the inside of the wheels. Because this was the first time the tires were off the front wheels after leaving the factory the wheel certification tag was still in there. Apparently my front wheels were “CERTIFIED MAY 4 2005.” This jibes with what I know about the car’s production timing, as I toured the factory in the last week of June 2005 and saw it on the assembly line. 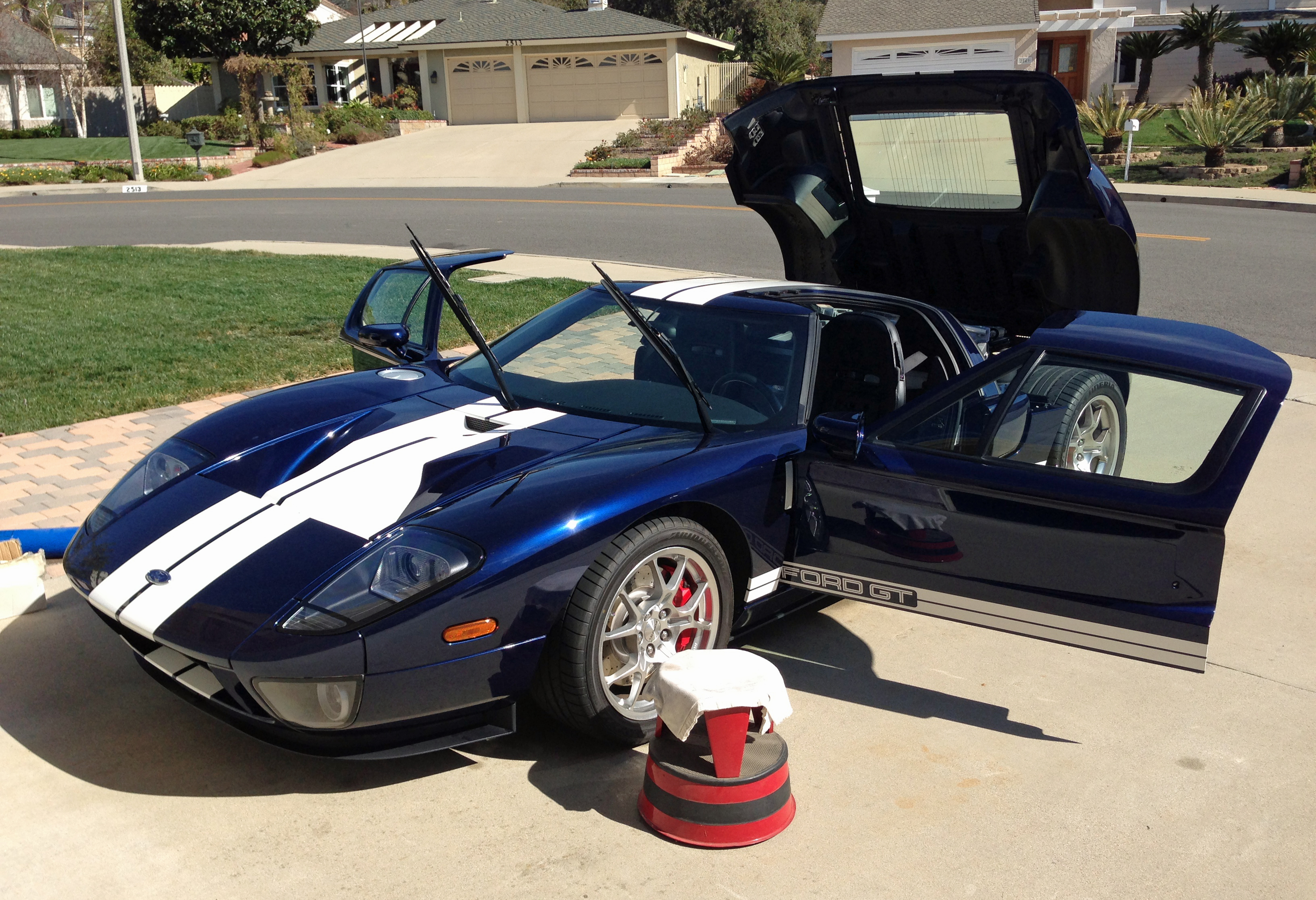 A thorough wash and wax was performed prior to departure

The only thing worse than 2,000 miles of road grime is 2,000 miles of road grime on non-waxed paint. As such, I spent about six hours yesterday washing and waxing the Ford GT’s paint in prep for its journey though the Rocky Mountains. To do the job correctly you can’t just wash it and dry it off, and you can’t even just add a coat of wax. No, to do it right you must strip all the old/existing wax off and start from scratch.

So the first step was washing the car to remove all existing dirt and grime from the paint. The GT was still pretty clean from the last washing so this was relatively quick and easy.

Next I used a clay bar to remove any previous wax build up. Spraying each area with diluted Zaino Z6 provides a lubricant to help the bar slide across the paint. These clay bars can do amazing things, especially on paint with built up gunk and grime. The GT’s paint was relatively grime free, but the process did remove some black spots in the painted white stripes over the top of the car. It was less effective on the dark scuffs in the vinyl tape stripes on the rocker panels.

After the clay bar treatment it was time for another wash to clear wax residue and remove the water spots formed during the clay bar process. The paint is now completely cleared of dirt and previous wax so you can start building up a new layer of protection.

Now comes the Zaino wax, using Z5 with accelerator to create “ZFX” compound. This will dry quicker than straight Z5 and supposedly create a stronger coat of wax. Apply to entire vehicle and allow 15-30 minutes to dry before removal (without accelerator you’re supposed to allow at least 60 minutes). This works well because by the time you finish the car you can start on the first areas you waxed, as they’ve been done for at least 30 minutes.

Finally, Zaino suggests going over the ZFX with Z6 finishing product. This helps bring out additional shine and ensures all excess ZFX from the previous stage has been properly buffed out and removed.

As mentioned, the entire process cost me about six hours and plenty of lingering aches and pains (the only way to do the rocker panels and front grill area properly is to lie on the ground).

The upside is the car’s paint looks as good as the day I bought it. The bad news? I haven’t even touched the wheels, windows or interior yet… 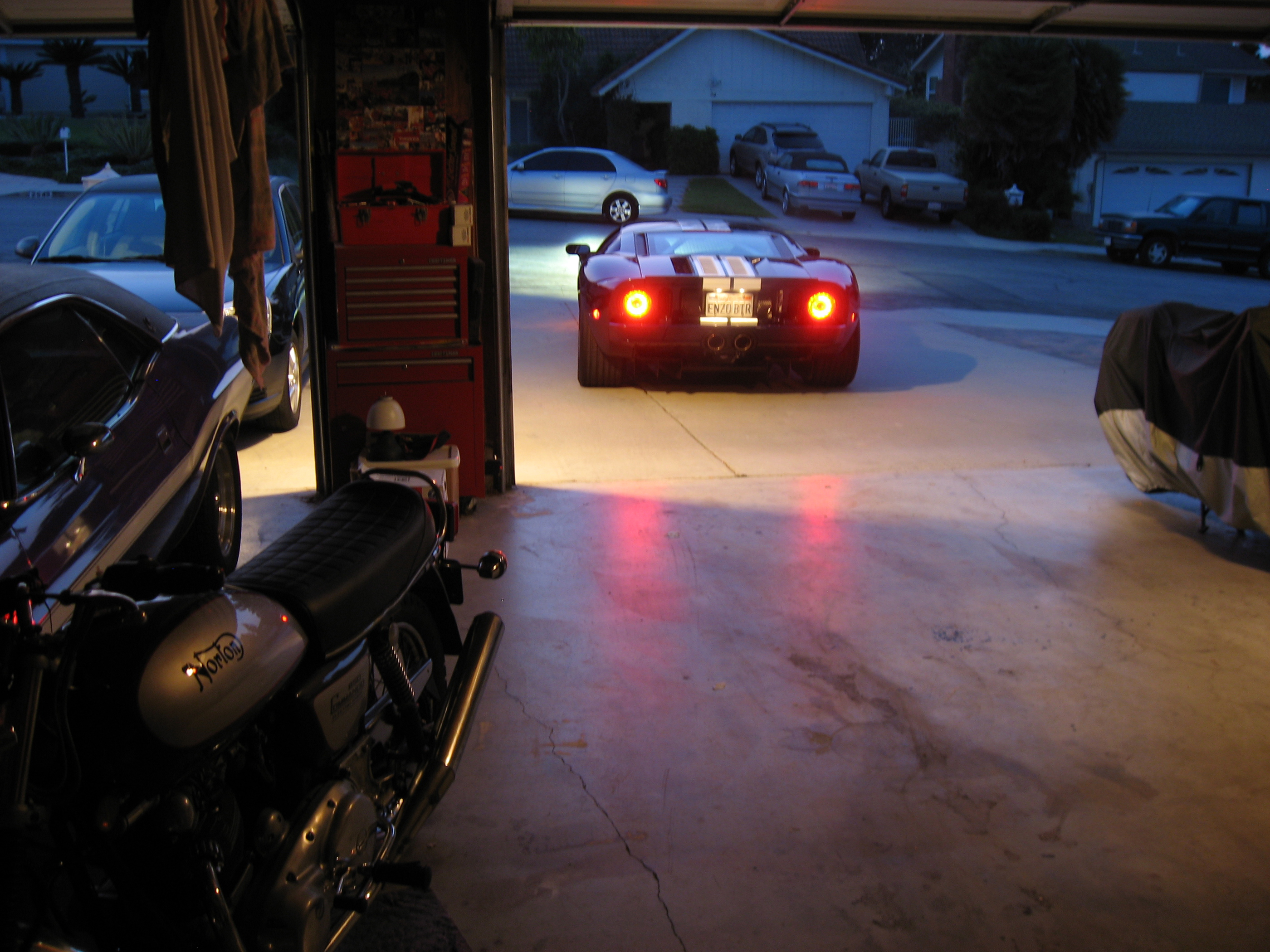 An early-morning departure for Denver ahead of a 1,000-mile drive

It only took 14 hours to drive from Ventura County to Denver in my 2005 Ford GT, and that’s pretty good considering it was a daytime run with plenty of traffic in and around Las Vegas. I give partial credit to this black Chrysler 300C with 20-inch wheels. The guy wanted to go fast between Los Angeles and Las Vegas, which made him a perfect blocker as long as I stayed with him. 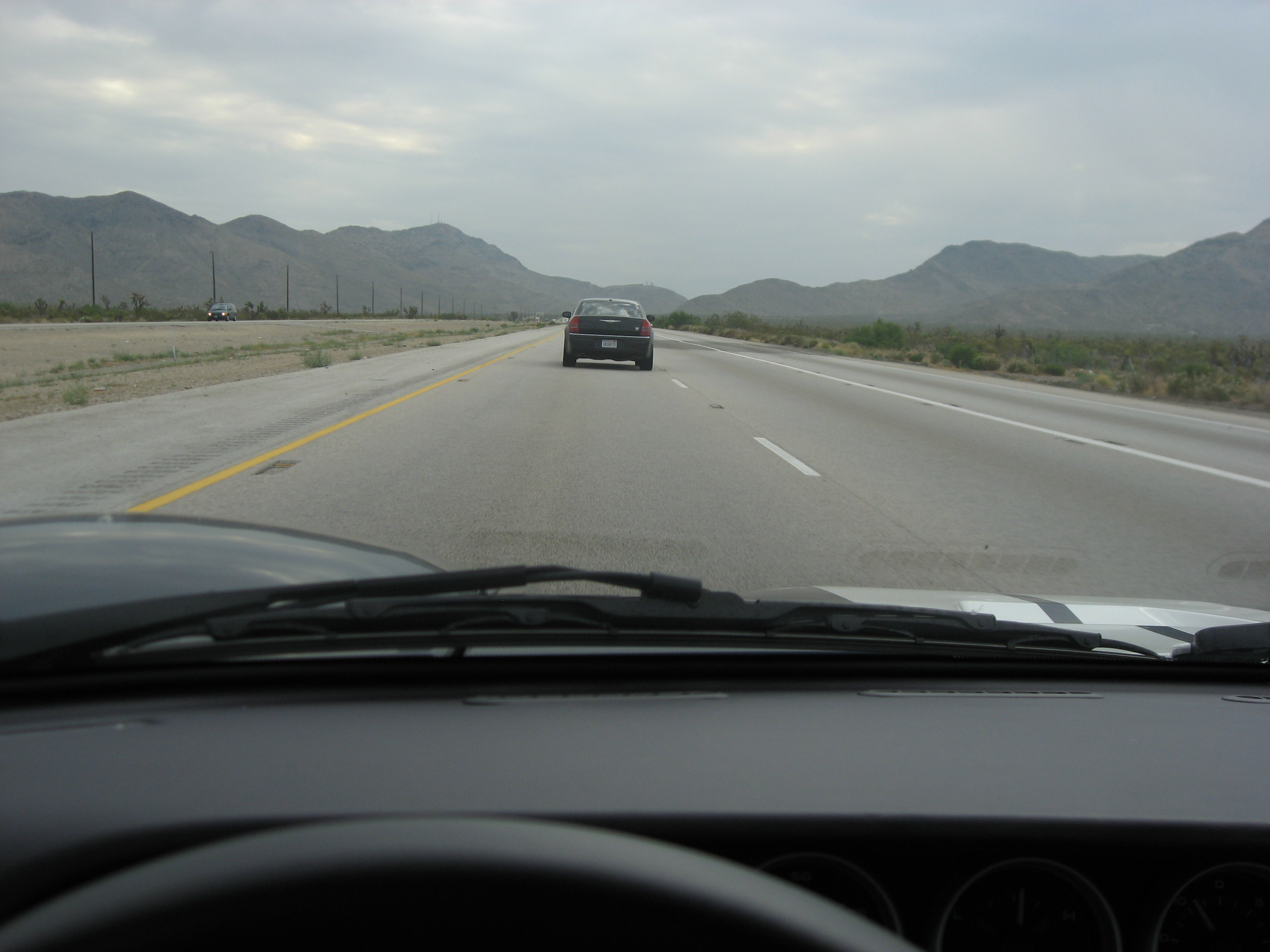 By the time I crossed into Arizona, it was HOT outside, and it remained that way until Vail Pass. The GT’s air was on the whole time, keeping the cabin cool and my sinuses dried out and irritated (this is not unique to the GT, all A/C systems will do this to me after about two hours). But the temp gauge never went above halfway. 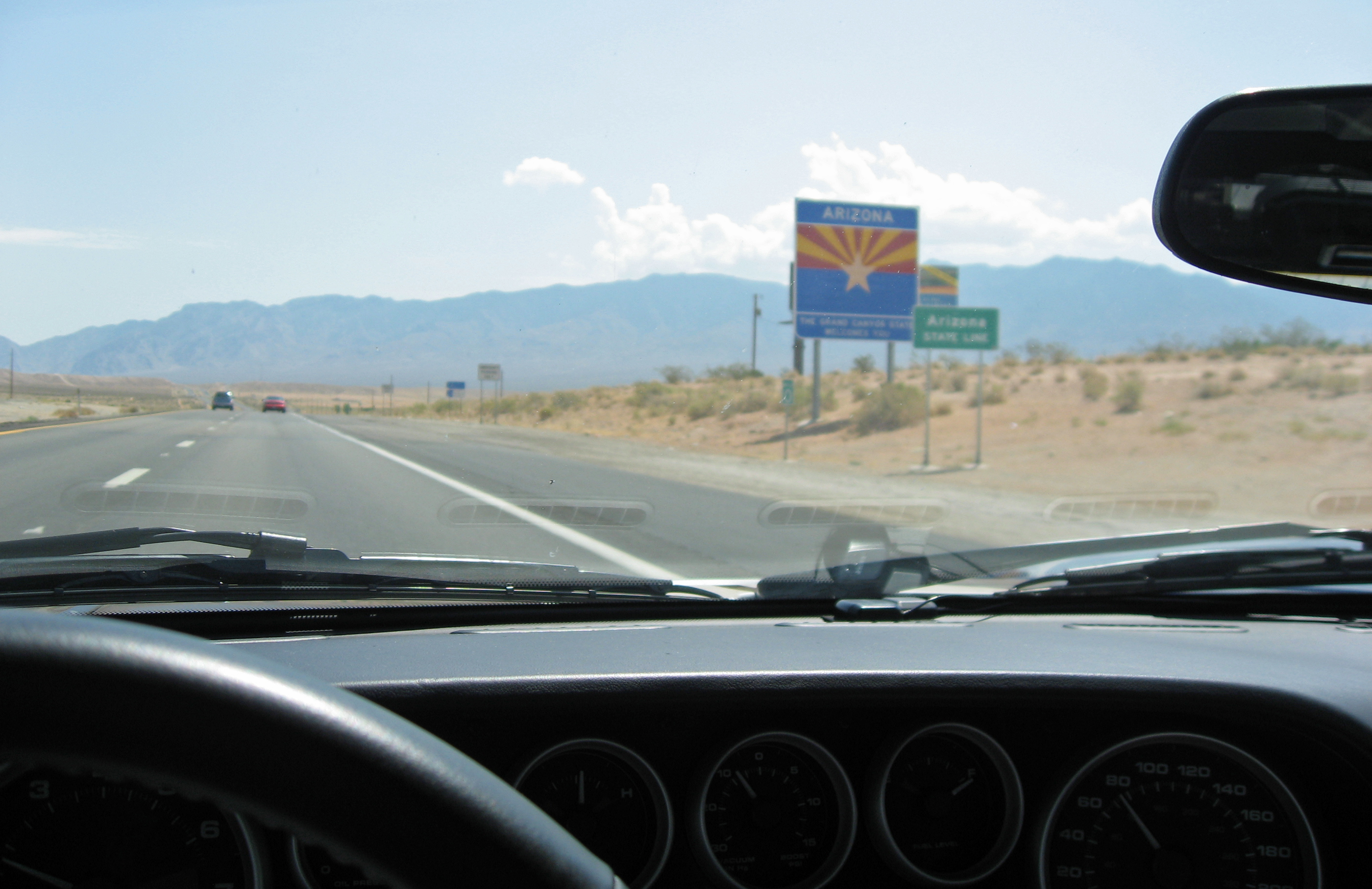 I crossed into Arizona just 6 hours after leaving Camarillo

Gas mileage was right around 20 mpg — despite my average speed. Two-thousand RPM is good for 90 mph and 2,500 gets you 102, so keeping it at 80 or below has the engine basically idling. I’ve heard other owners report 25-plus MPG on highway runs, which seems believable now. 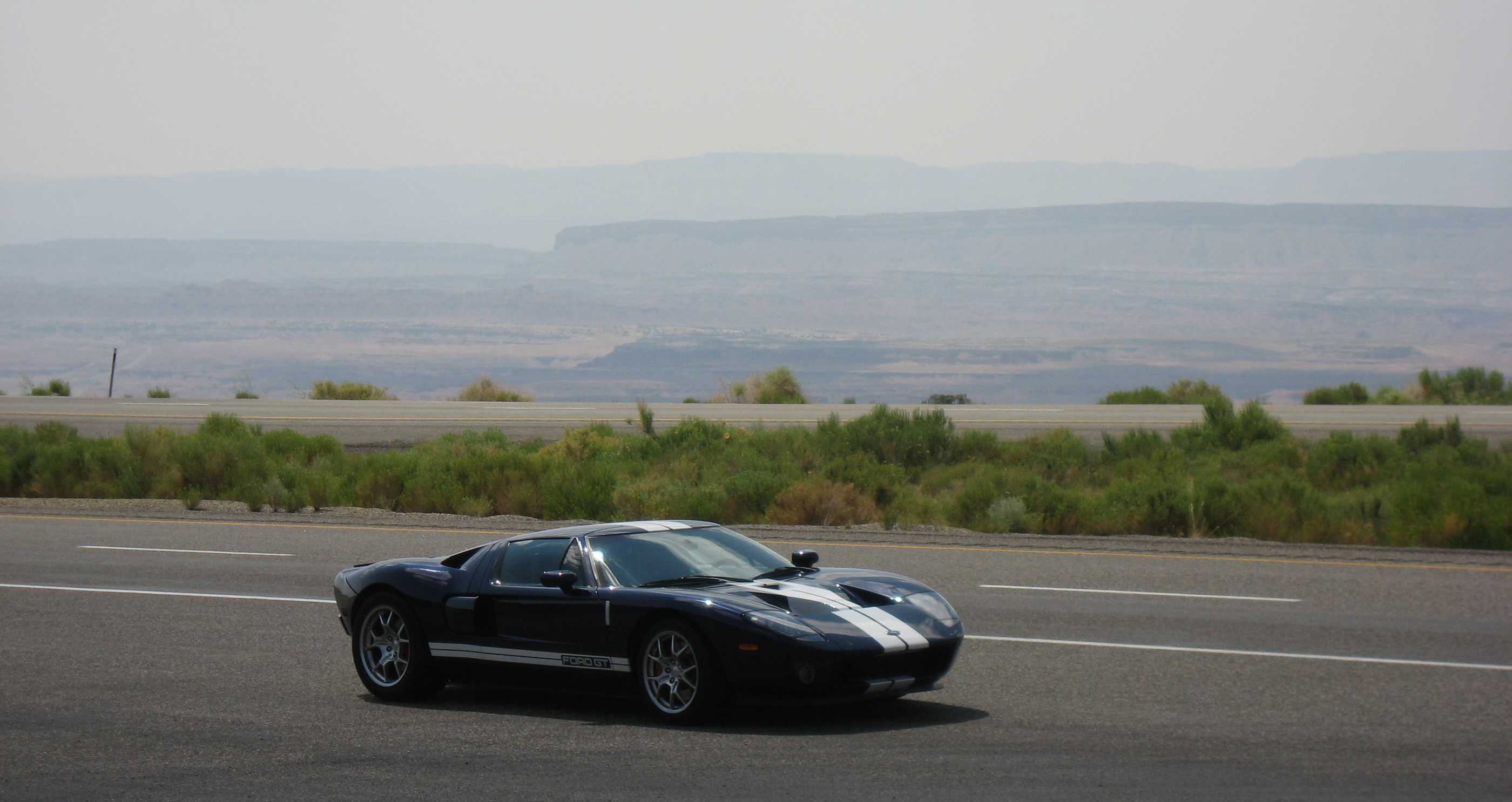 A stop in, literally, the middle of nowhere Utah on my way to Denver

I did make one unscheduled stop in the middle of Utah, halfway between Salina and Green River (a 108-mile stretch with no services…). This is the exact spot where a 2003 Honda Pilot stranded my family in May of 2003, so it seemed appropriate to make a (voluntary) stop and shoot a photo of the GT. 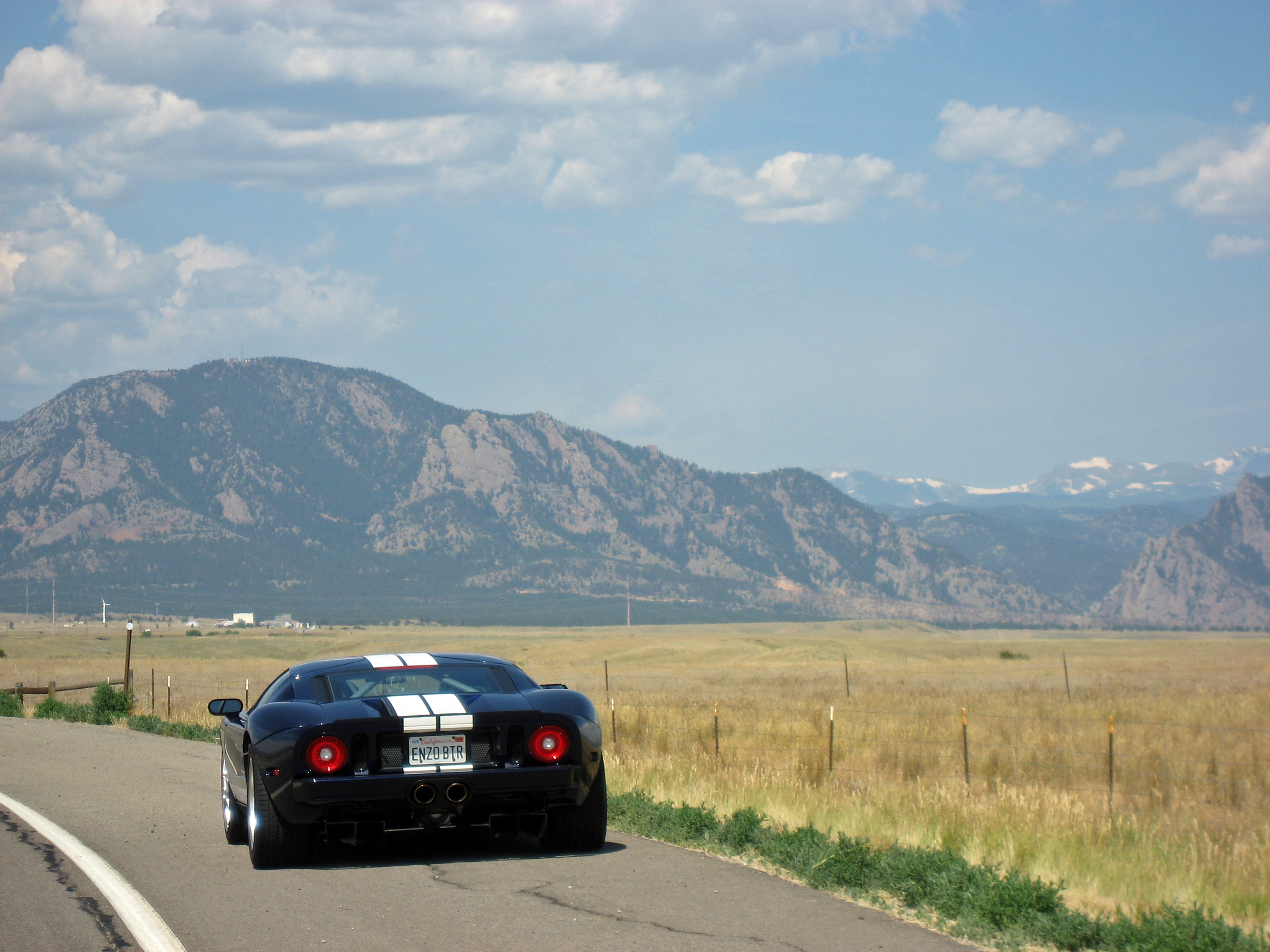 When I decided to drive the my 2005 Ford GT from Los Angeles to Denver for my high school reunion I had some expectations, assumptions and hopes. I expected it to provide a relatively comfortable and entertaining form of high-speed travel. I assumed it would prove fully functional over a 2,300-mile road trip. And I hoped it didn’t suffer any mechanical maladies.

Turns out my plan was flawed; my expectations, assumptions and hopes skewed far too low. Not only did the Ford GT prove a flawless cross-country mount but it performed said duty at a level I didn’t predict. I’d like to think Ford’s exotic couldn’t still surprise me after 13,000 miles, but it could and did.

For example, while I’ve driven the GT on a few long-distance journeys they were always in the confines of our nation’s most populous state. In contrast, this trip had me traveling through such wide-open spaces as Nevada, Arizona and Utah, where the car’s high-speed demeanor could be fully utilized.

Under these circumstances the car feels most settled at around 2,400 rpm, but in sixth gear that’s about 100 mph. So far no surprise, right? But what if the car were capable of a consistent 20 mpg at those speeds? I’m not sure what kind of mileage a Prius or Civic would pull at 100 mph, but I would argue when you triangulate mpg against travel speed (and thus travel time) the Ford GT starts to look pretty damn fuel efficient. Of course on a 107-mile stretch that included Las Vegas (and road construction) I was forced to travel at closer to a 70 mph average. On that run I recorded 26.2 mpg. 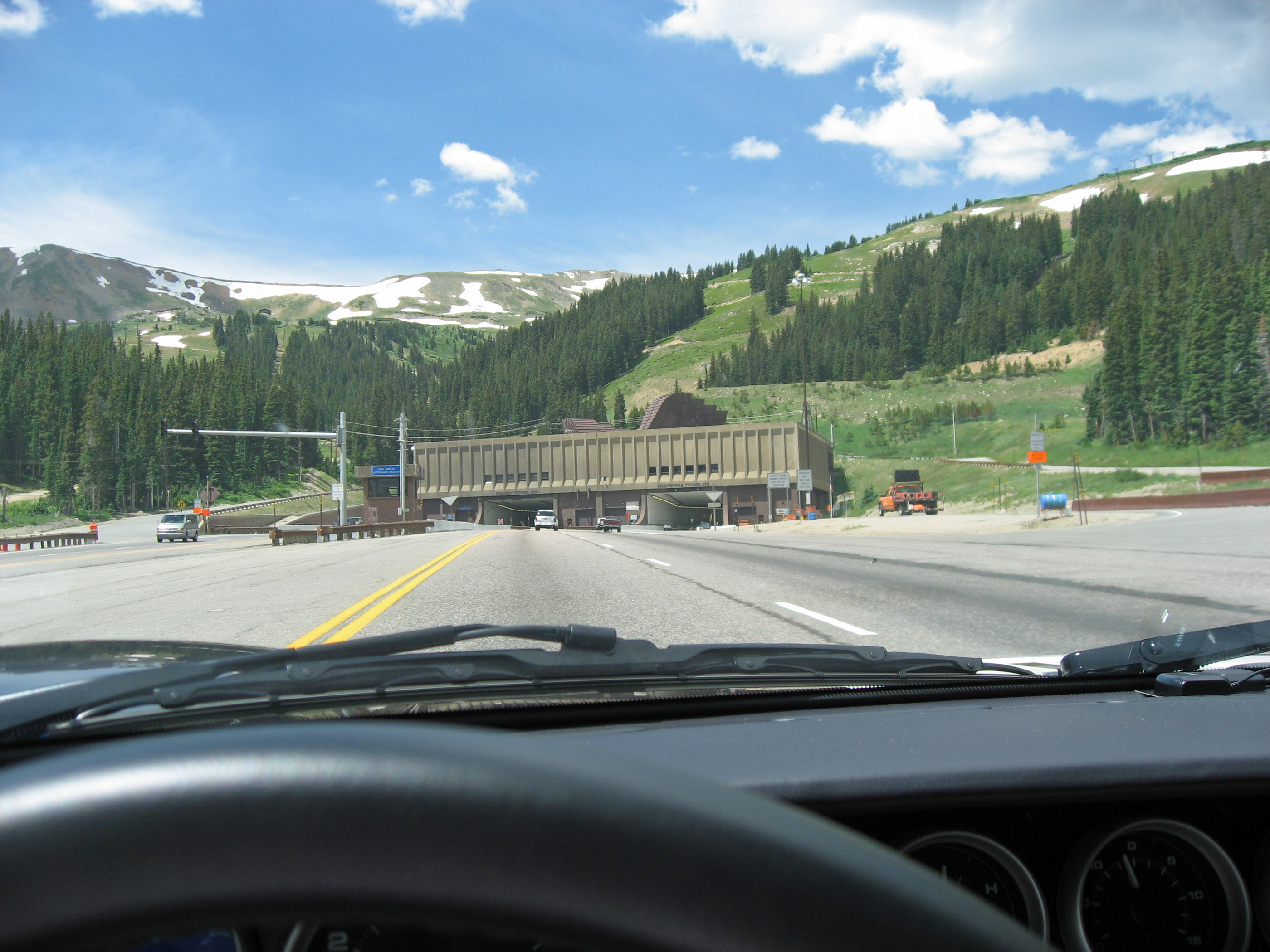 And if you think the GT pulls that mileage with a super high sixth gear…well, you’re right. But with the Stage One mods on this car (supercharger pulley, ECU reflash and Ford Racing/Borla exhaust) the broader torque band means you never have to shift out of that high sixth gear — even when scaling Vail and Loveland pass at approximately 11,000 feet. In fact I didn’t just slog up those mountains, I passed other traffic and continually placed the car where I wanted in traffic, all without downshifting. 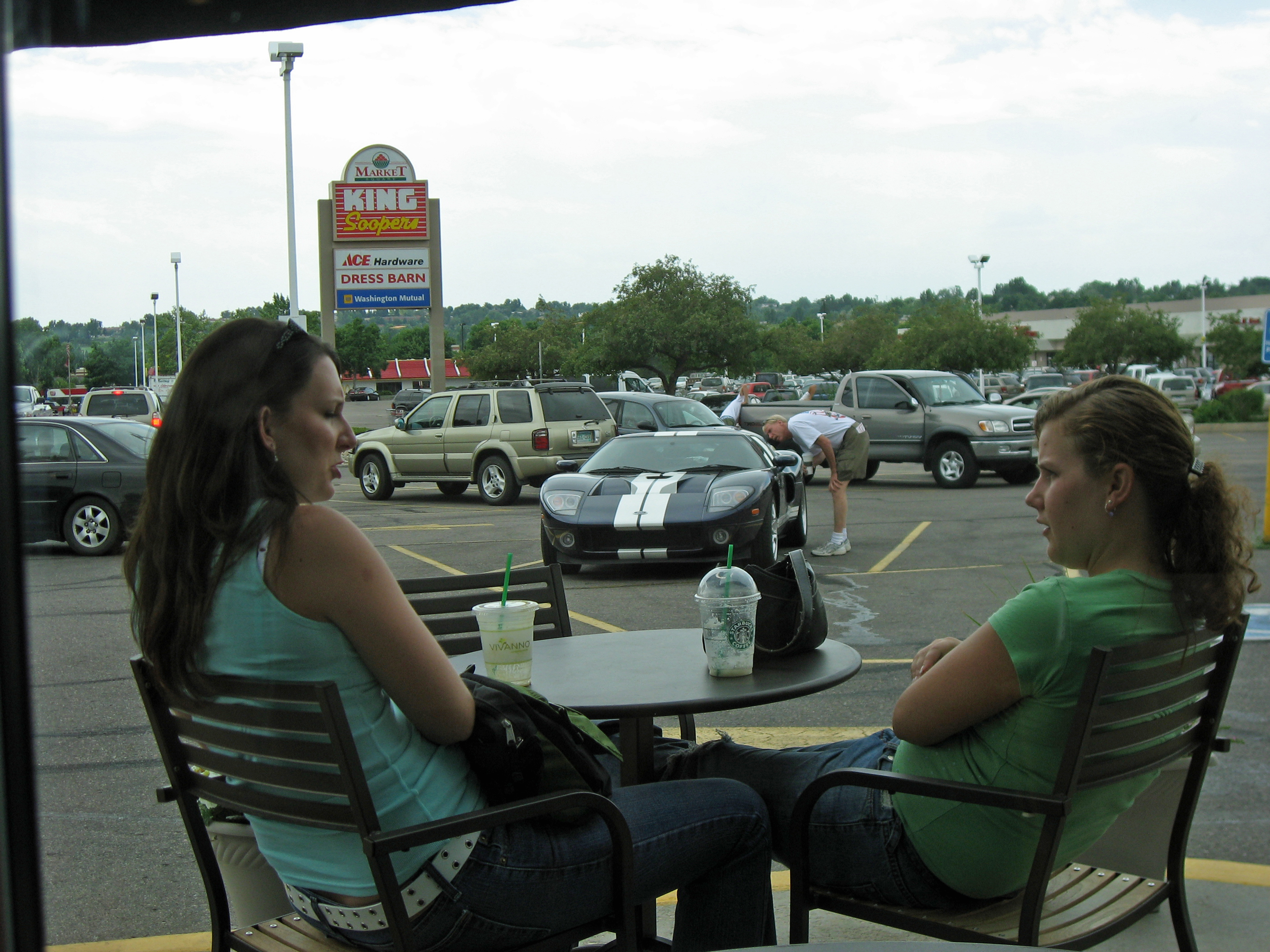 Needless to say this trip was a boon for the Ford GT’s lifetime fuel mileage, which is now at exactly 16.987106. Not bad for a 600 rear-wheel-horsepower supercar that’s knocked off a zero-to-60 time of 3.5 seconds.

“Okay, so the car makes the most out of non-renewable resources, but what about storage capacity? Is there really space for two people and luggage?”

Glad you asked. There’s no doubt careful planning is necessary when packing for a trip in the GT. But it did carry the wife and me, and a good chunk of luggage, across the country without the use of a chase vehicle. 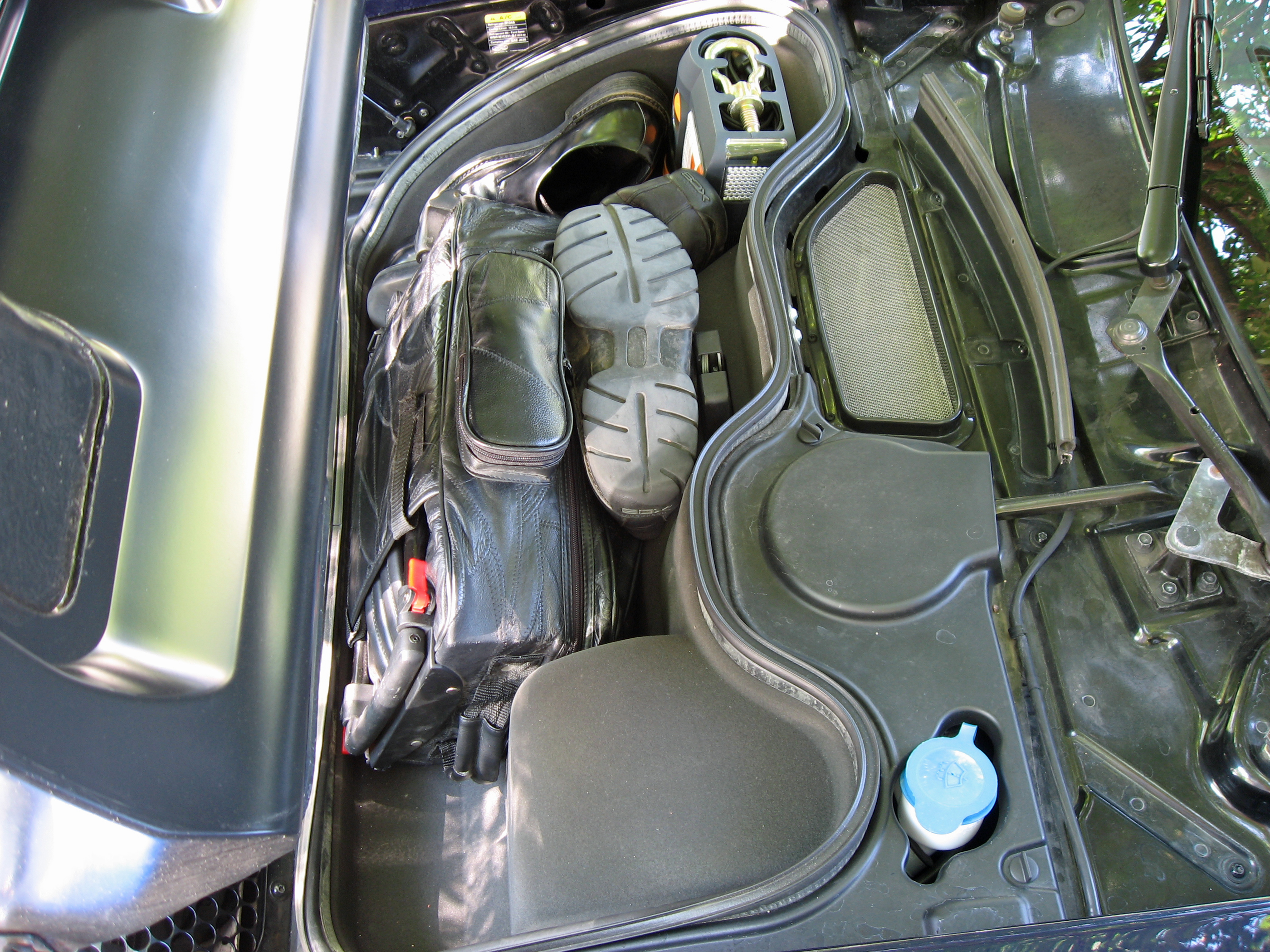 The front cargo area can hold a small amount of luggage

The front cargo hold handled my small carry-on bag, as well as two pairs of shoes.

Behind the driver’s seat I stashed my water bottle, some packages I bought and my jacket (that I never needed during the trip…). Behind the passenger’s seat I placed my office bag (or “man-purse” in Seinfeld-ese), another water bottle and travel munchies. In front of the passener’s seat was my wife’s tote bag, but she still had enough room for her legs and feet (she’s 5’4″). 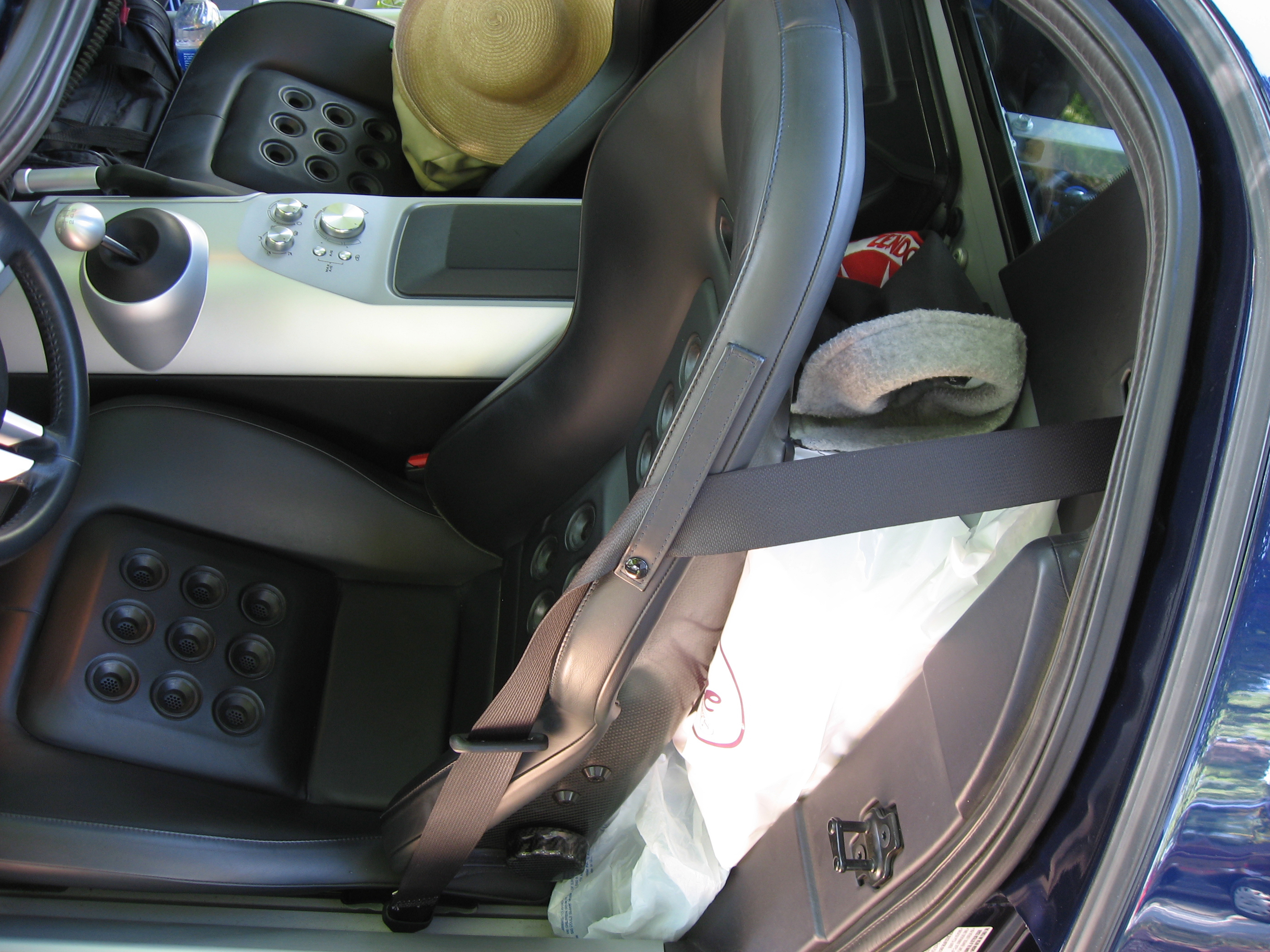 The wife gave the GT an official thumbs up as a road tripper, commenting that, “It really surprised me. The seats are very comfortable. Not quite as good as the Honda Pilot’s, but way better than the Jeep Commander’s.” 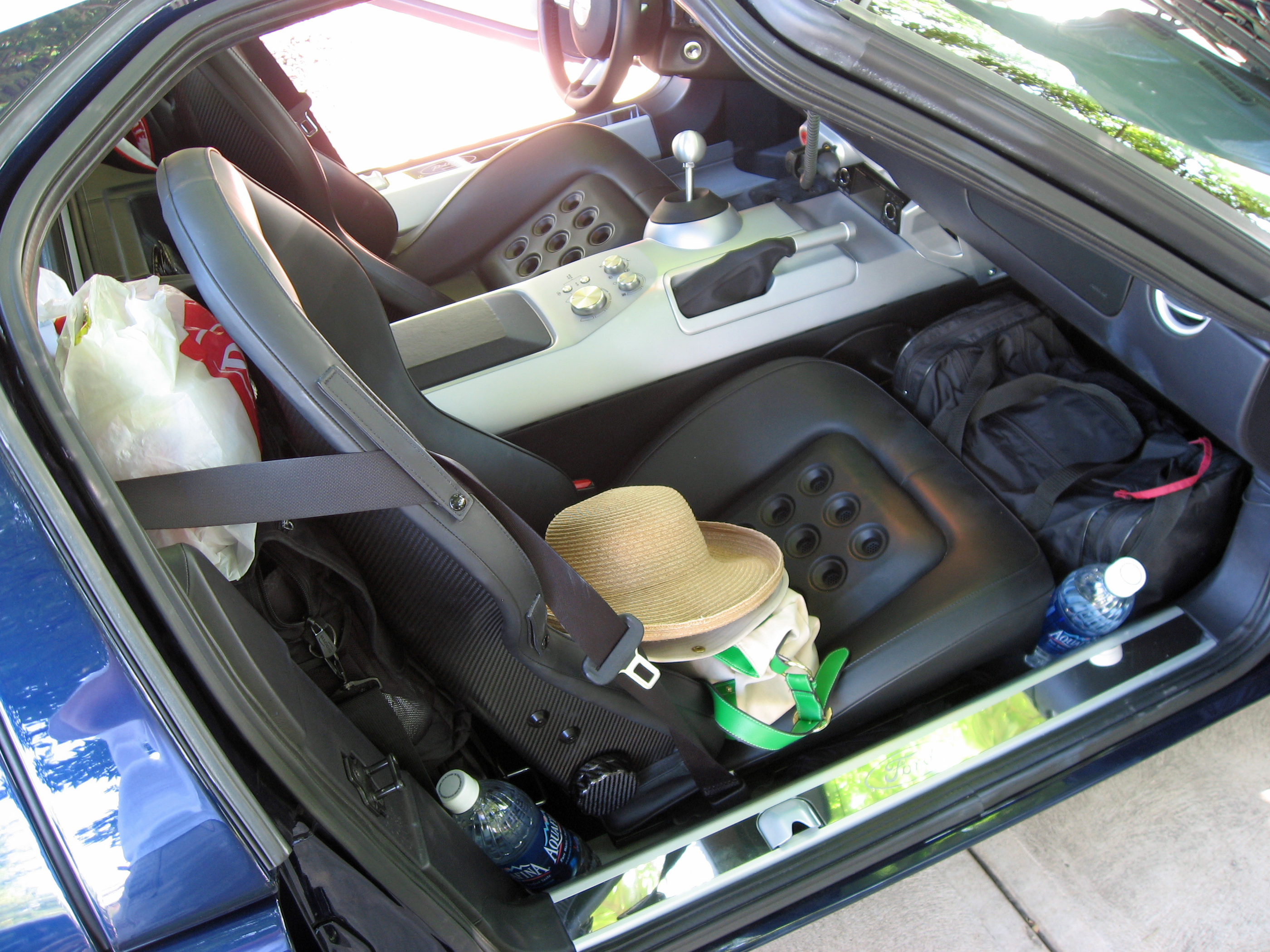 Another first-time factor on this trip was rain, as it came down in scattered showers during most of the five hours we spent crossing Utah. Except for one three-minute sprinkle about a year ago the GT had never driven through any real weather before, and certainly not in substantial rain and over drenched roadways. I wasn’t even sure the wipers worked. 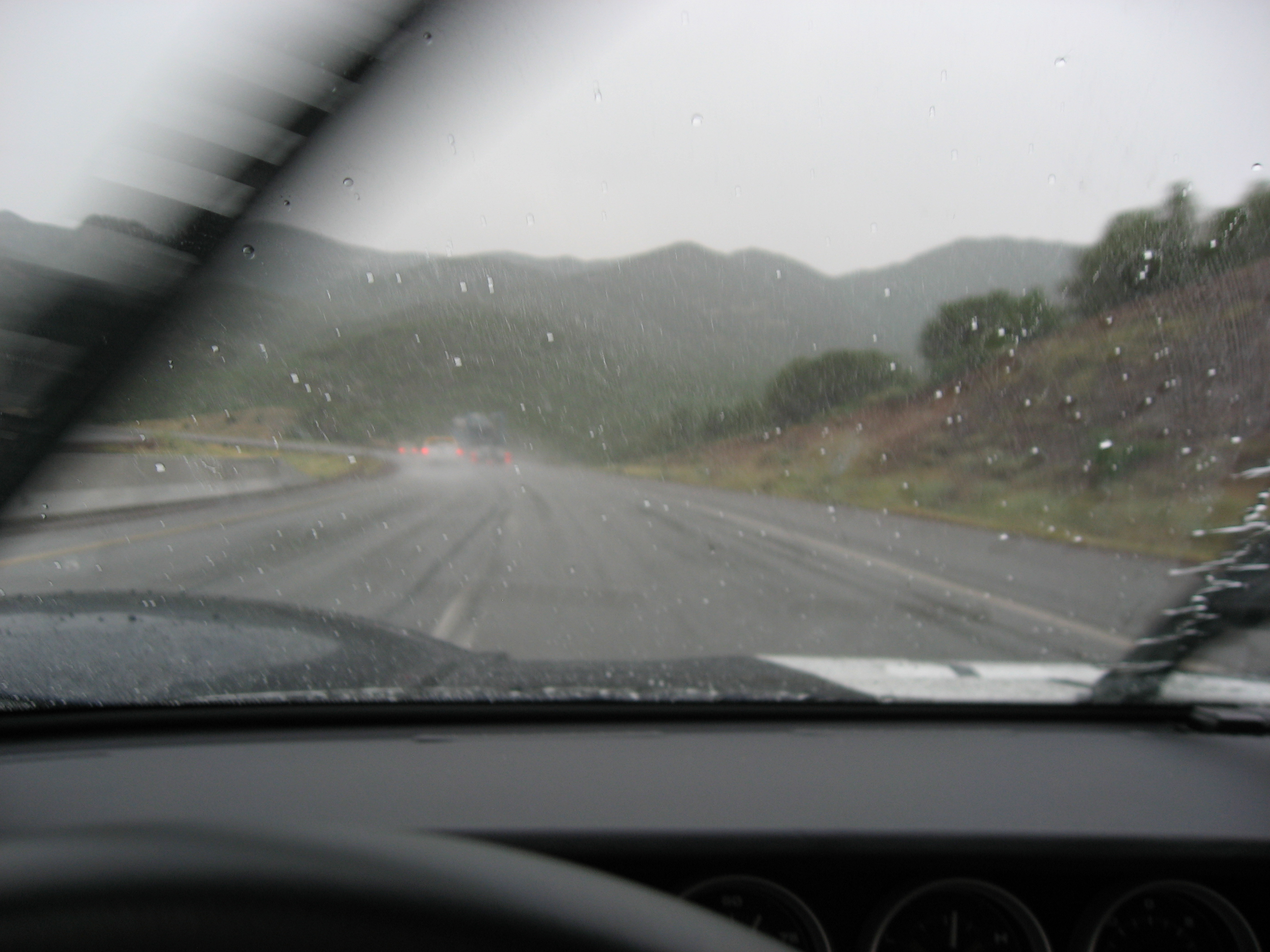 But they did, as did the tires, door gaskets and underbody seals. It started raining, I turned on the wipers…and just kept going. Reason for celebration? Obviously not from the GT’s point of view, but I know plenty of supercars (and supercar owners) that would sooner drive through Baghdad rush hour than drive in the rain.

Did I already mention how impressed I am with the Ford GT?