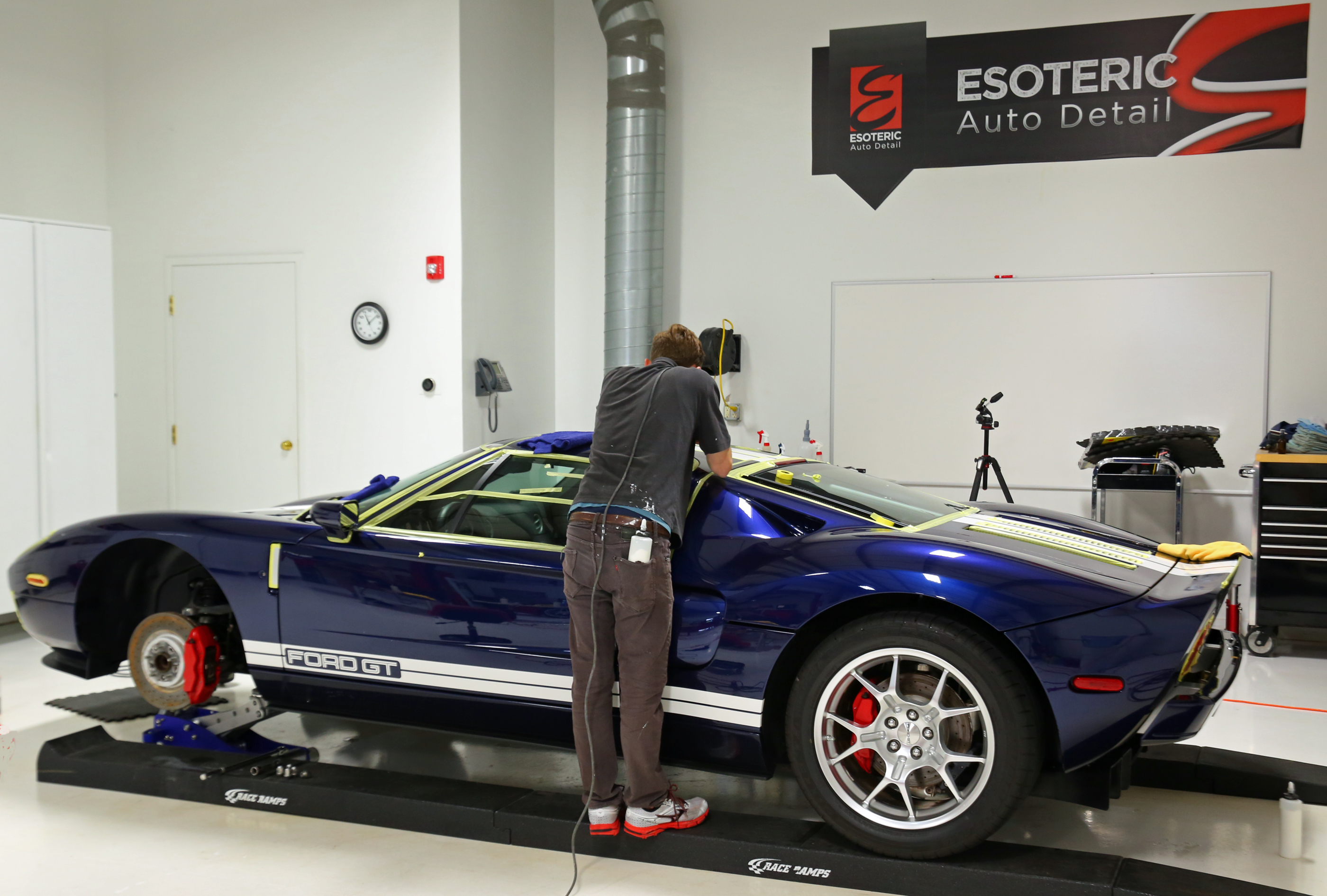 In the summer of 2014 I was attending an Acura press event and met an engineer with a (first-gen) Acura NSX. When I mentioned I had a 2005 Ford GT he told me about a detail shop capable of restoring the paint on older cars with micro-scratches. These scratches can be hard to see unless you know what to look for, but they have a devastating impact on a car’s appearance. It can mean the world to a car owner who is interested in vintage or classic cars and wants their car to look as good as new. 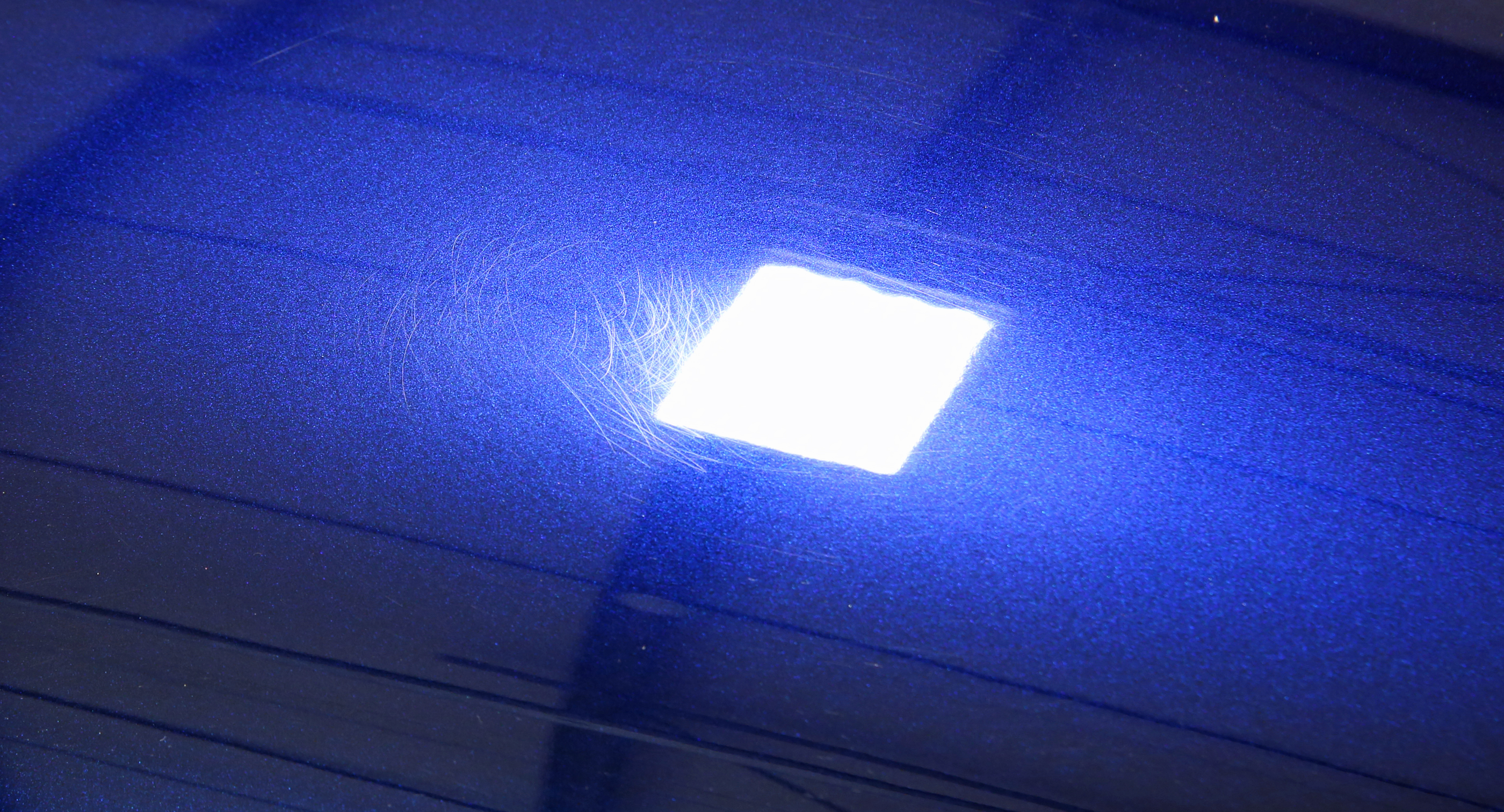 After owning my Ford GT for nearly a decade I could tell it didn’t have the same sheen I saw in early pictures when the car was new. The thought of restoring that shine through a polishing process, often referred to as “Paint Correction” or “color correction” was appealing, especially with a full endorsement from a knowledgable automotive engineer with his own older, mid-engine exotic car. 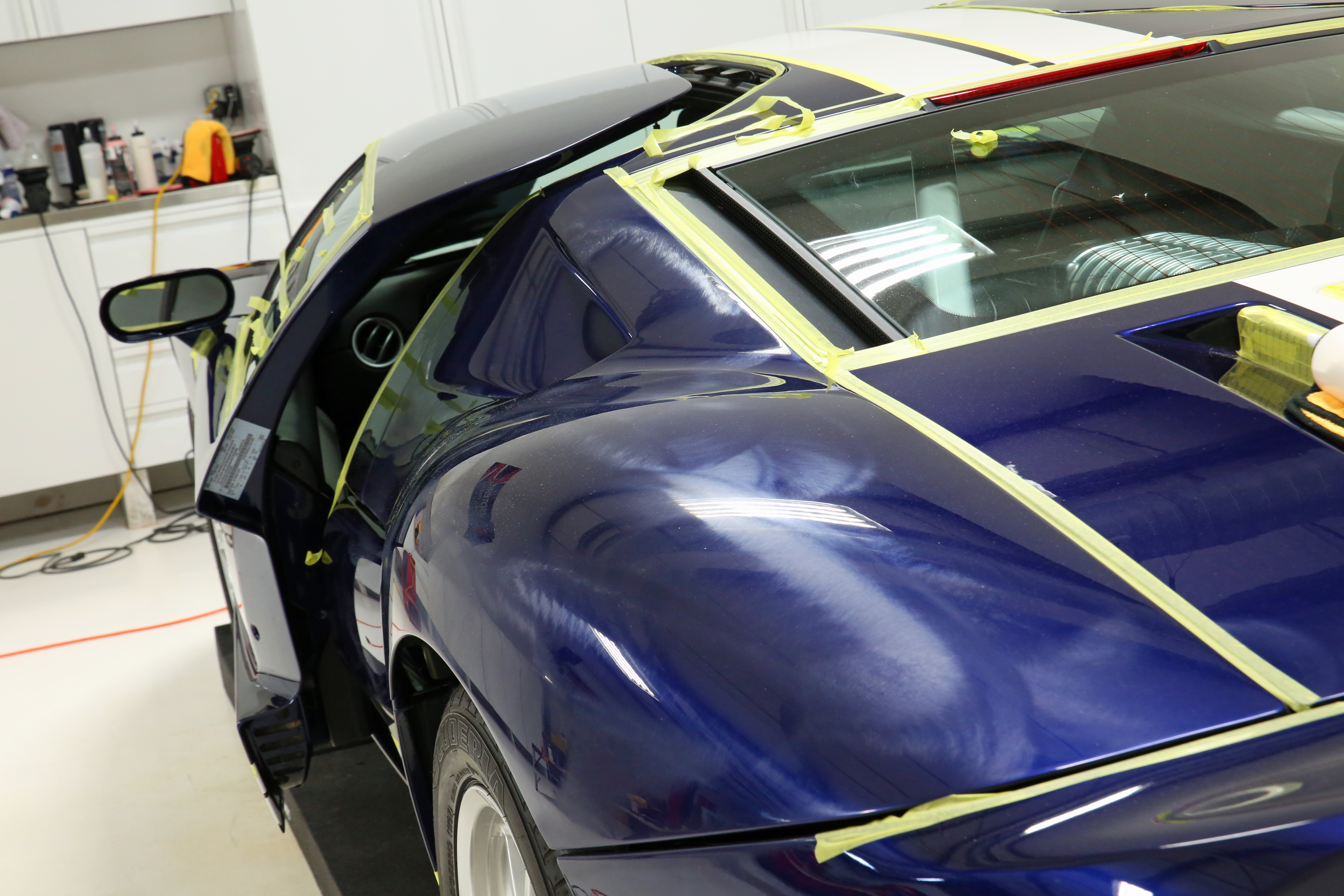 A multi-stage polishing process with specific chemicals removes the scratches

The shop, Esoteric Detail, is located in Columbus, Ohio, putting it about 2,000 miles from my Ford GT’s home in Southern California. I didn’t see my car ever getting to Esoteric Detail, but I couldn’t stop thinking about the possibility of restoring the GT’s original shine. 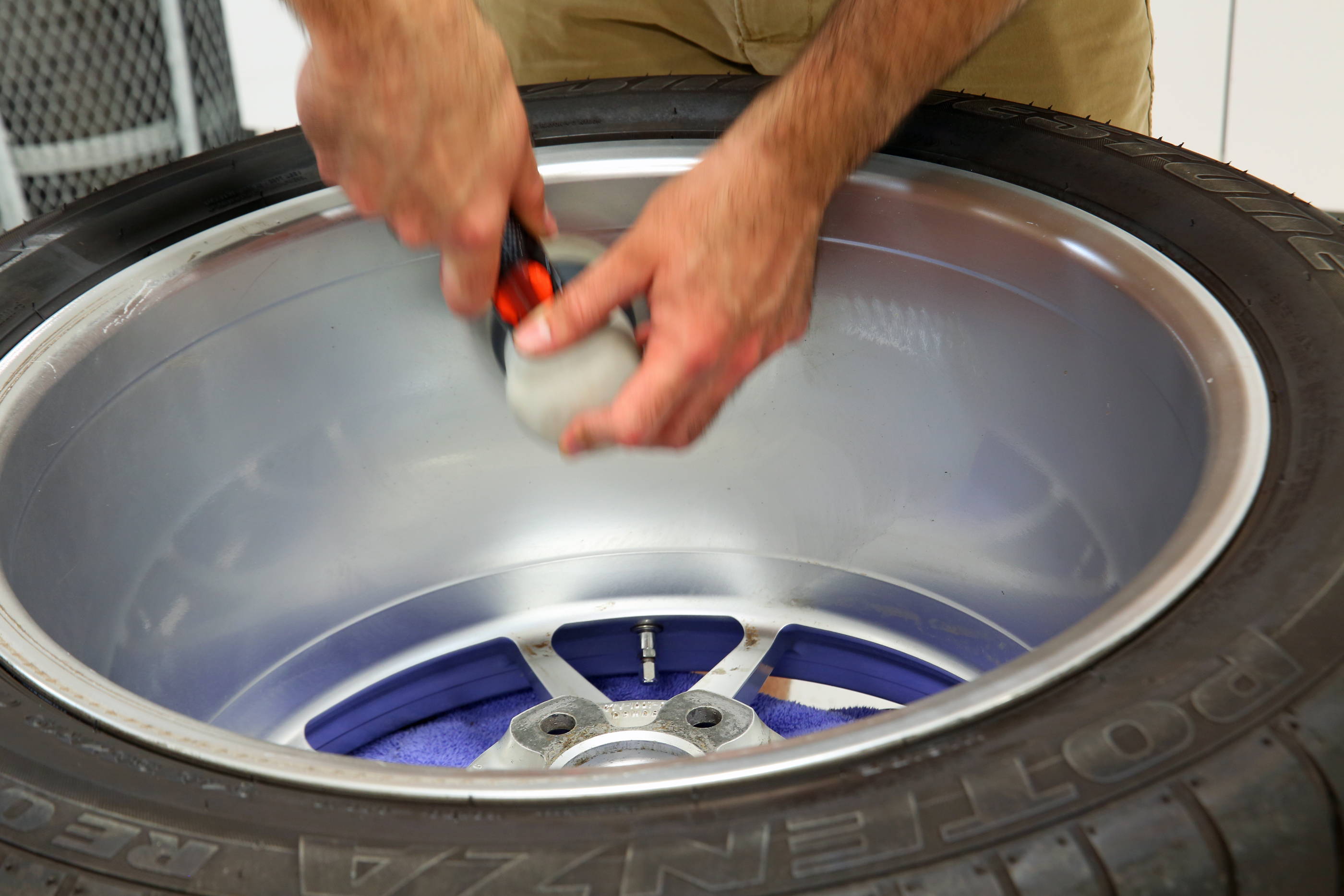 Then, in early 2015 I learned the 9th Annual Ford GT National Owner’s Rally would take place in Detroit, about 200 miles due north of Columbus. I’d never shipped my car across the country, but if I could ship the GT to Detroit I could have it serviced by the GT Guys, attend the rally and visit Esoteric Detail for a paint correction. 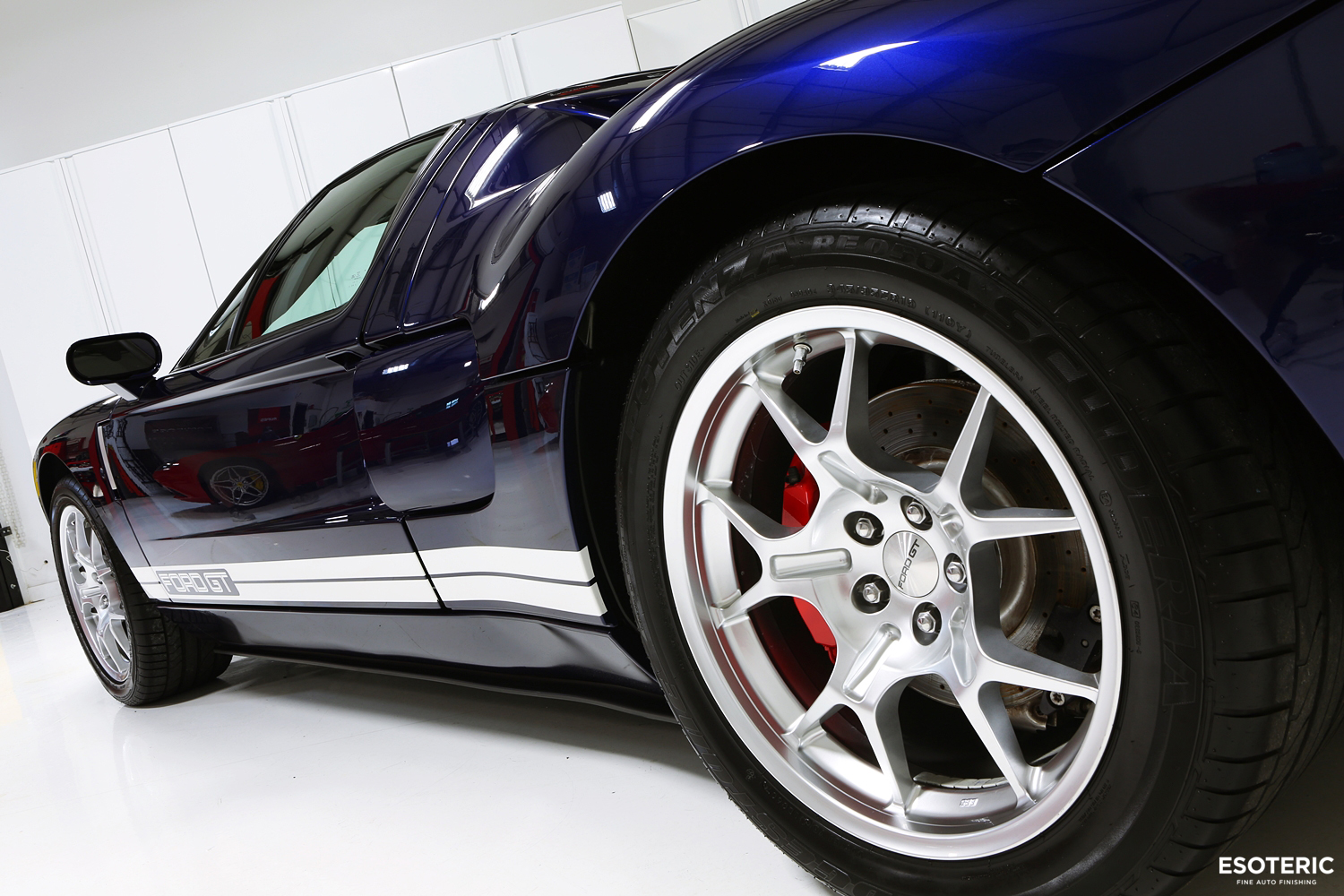 After researching the cost of shipping my Ford GT to Detroit I decided to do exactly that. The car received Esoteric Detail’s full color correction treatment, plus a full wheel and glass detailing. The change in the car’s color tone was obvious as it backed out of the shop into full sunlight.

You can read the full story I wrote on the process at Forbes.com, but the short version is this: it worked, with the Ford GT looking as good as, or better than, the day I picked it up on August 23rd, 2005. The fact that it was completing its paint restoration treatment on August 23rd, 2015 seemed somehow fitting.