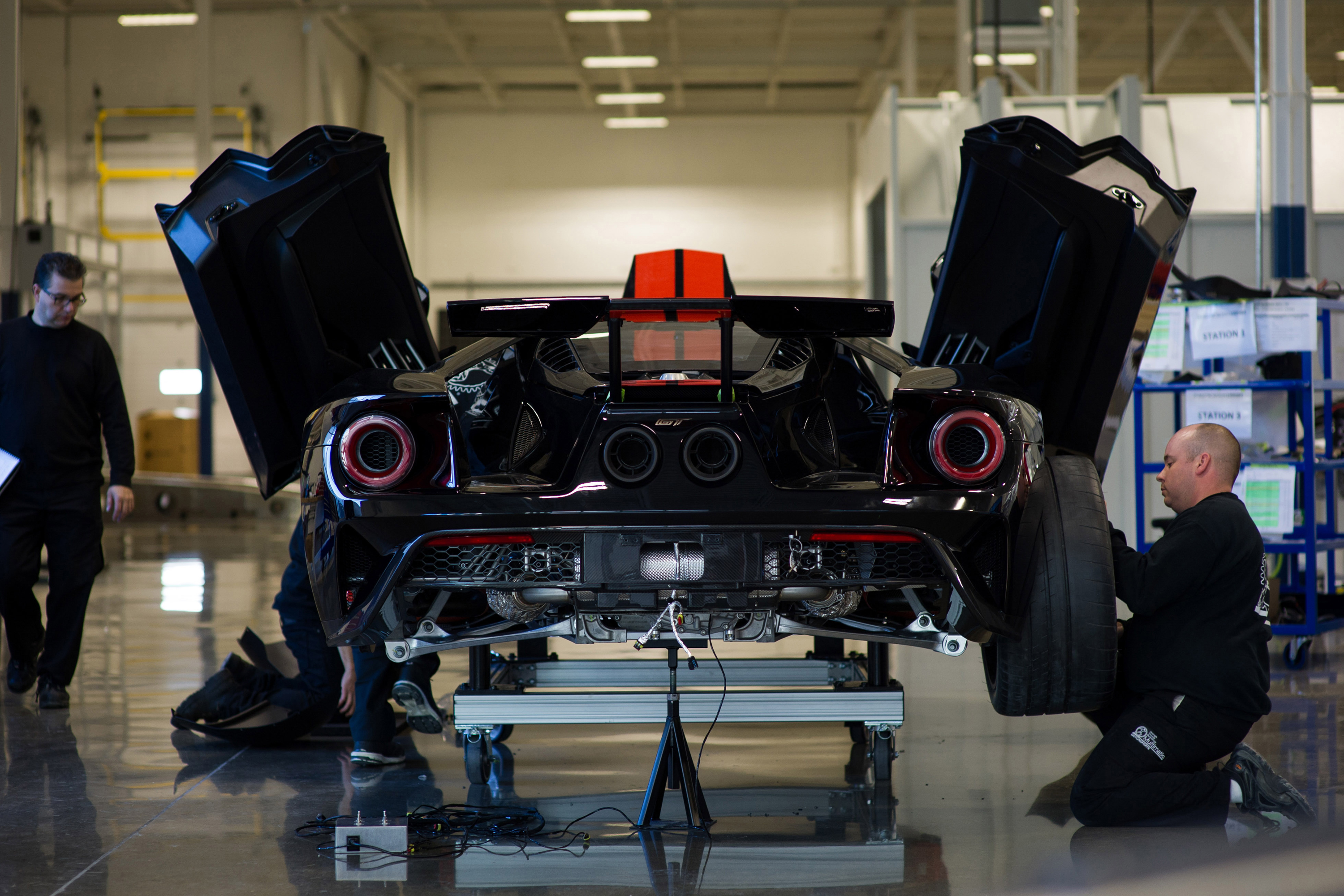 (NOTE: This caption was embedded in this photo’s digital signature, and while I can change it I’m leaving it here because, unlike too many captions attached to manufacturer photos, this caption is effective and informative) MARKHAM, Ontario, Canada, Dec. 16, 2016–The all-new Ford GT is entering the final phase of development and production has begun. One of the first Ford GTs is being driven off the line at the Multimatic assembly location with the first behind the scenes look at the assembly line for all-new Ford GT. The Ford GT is the culmination of years of Ford innovation in aerodynamics, lightweight carbon fiber construction and ultra-efficient EcoBoost engines. Pictured: Anthony Benincasa (left) and Adam Thorndyke.

The new Ford GT’s specs were as guarded as the Coke formula or Kentucky Fried Chicken’s secret recipe when the car was under development. The specs were finally, fully released during the car’s press launch in May of 2017. At that point most enthusiasts had a general idea of the primary specifications, but the below sheets offer it all up in stark black-and-white (with some gray and yellow thrown in) pixels. 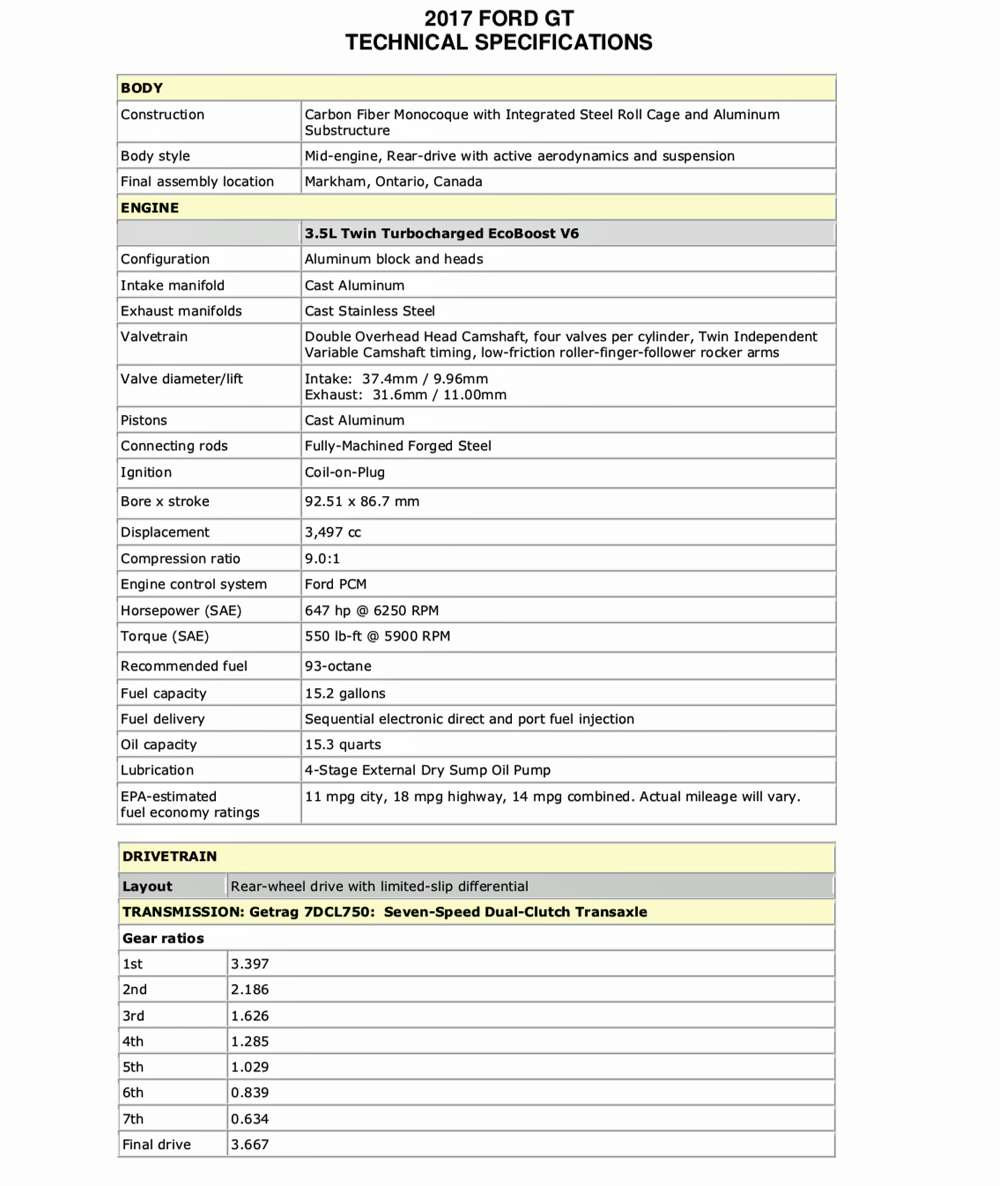 Nothing too shocking here. The carbon fiber construction didn’t surprise anyone, nor did the 3.5-liter V6 EcoBoost engine and Getrag 7-speed dual-clutch transmission. Horsepower was another spec Ford wouldn’t commit to until the very end, assuring fans and journalists it was “more than 600”. 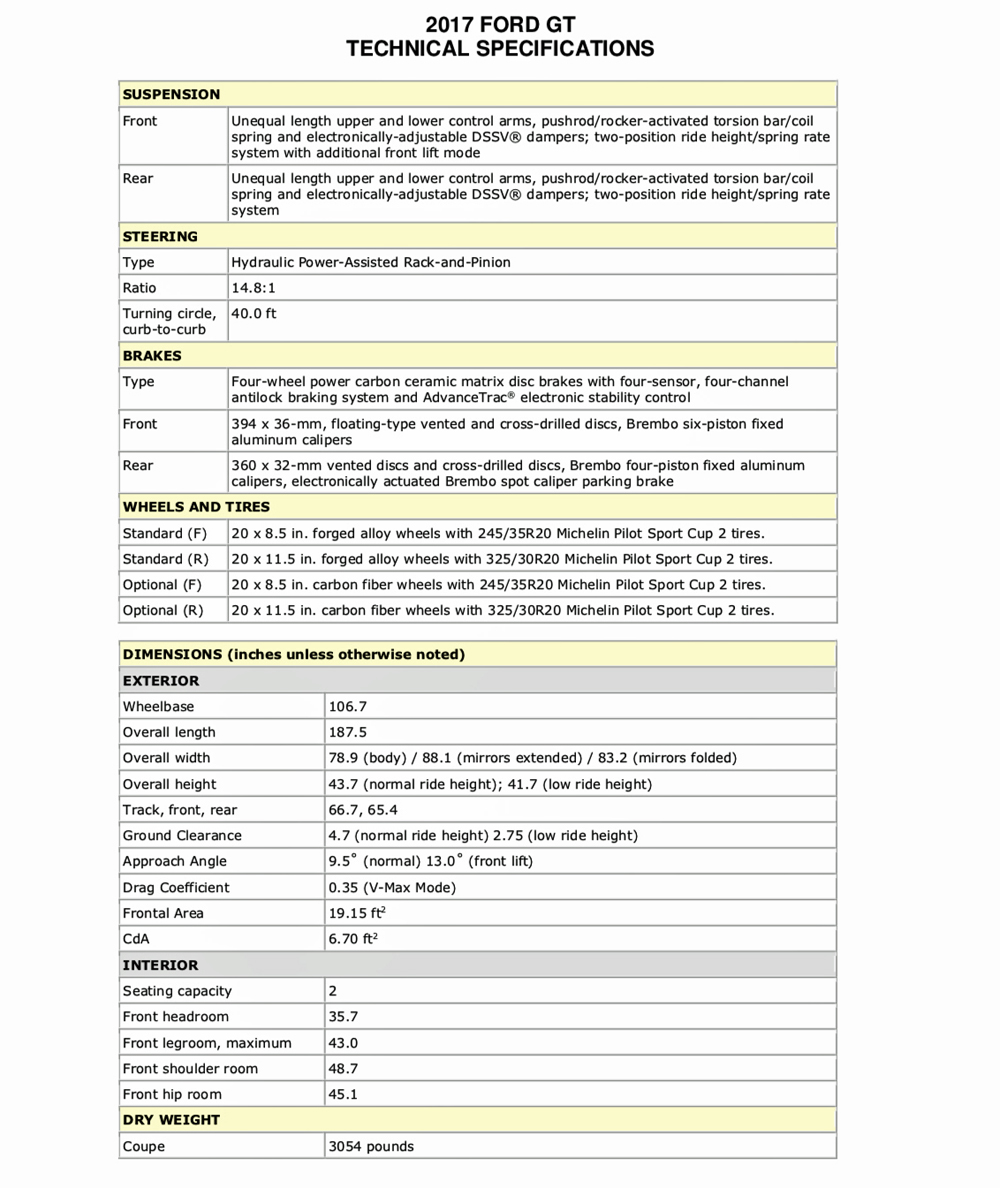 With a dry weight of 3,054 pounds the Ford GT wasn’t as light as some hoped

Perhaps the most surprising specification was the Ford GT’s curb weight. Rated at 3,054 pounds, dry, the GT’s weight was a bit higher than many had hoped. The talk of carbon fiber construction, Gorilla glass and titanium exhaust had many fans expecting a 3,000 wet (with all fluids) weight, but the GT weighs around 3,300 pounds wet. My understanding is the highly-advanced DSSV adjustable suspension adds a couple hundred pounds, a trade-off Multimatic and Ford obviously felt justified in making.

The 216 mph top speed is quite high, while the 0.4 cubic feet of cargo is quite low

The other specification people were dying to know? Top speed. At 216 mph the new Ford GT is about 10 mph faster than the 2005-2006 model. Some might have wanted a bigger bump given the decade between the car’s development, but anyone who knows aerodynamics knows every mph past 200 takes A LOT of horsepower and air management. Two-hundred-and-sixteen mph is fast enough for me.