Just over 5 years after getting my Ford GT it hit 20,000 miles. A 4,000-miles-a-year rate for a Ford GT is pretty good, though I was averaging over 5,000 a year during the first 3 years I owned it. The durability of the Ford GT continues to be its single most appealing aspect (except for the gauges, but at this point that aspect hadn’t reared its ugly head…yet). An unexpected durability test of the GT’s suspension strength occurred in West Los Angeles.

My Ford GT crossed 20,000 miles after 5 years of ownership

Is that Timex reference in the title too obscure for 2010?

Okay, then I’ll state it plainly: my Ford GT turned over 20,000 miles on my drive in to work this morning.

Between the “summer that wasn’t” weather in Southern California this past year, and my weekend schedule in recent months, I haven’t driven the car as much as I normally would. In fact, when I went to fill it up in September I noticed the previous fill-up in the fuel log had happened in…April! The odometer has actually been hovering right below 20,000 miles for most of this year, but it finally crossed that milestone today.

The good news? The car still looks and drives like it did over five years ago, when I picked it up at Santa Monica Ford with 7 miles on the odo.

Well, maybe it’s got a few battle scars. There are at least five or six noticeable chips on the front clip, and dozens more if you look closely. But otherwise the car is doing an impressive Dorian Gray. I had a professional detailer go through it last summer (inside, outside, underside, etc.) and he brought it back to a near-new appearance.

In terms of driving characteristics I can’t find anything to indicate those 20,000 miles. I’m assuming a drive in a low-mileage GT would uncover some “looseness” or other signs of aging in this car, but without that sort of back-to-back experience there’s nothing to report in terms of wear.

The car still rides, handles, brakes and accelerates like a crisp supercar, with no steering slop, suspension clunks or abrupt behavior when on the brakes or gas. It’s even still got the original Optima battery, though I’m wondering how much longer that will last.

Regardless, its “in the wrapper” status is long gone. Guess the only thing to do now is drive it. 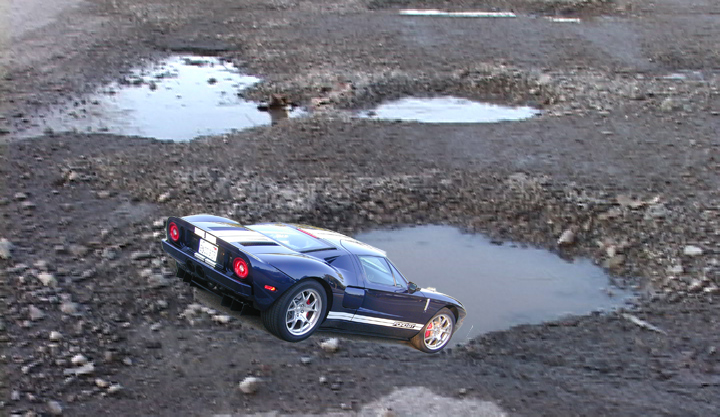 An invitation to a West Los Angeles holiday party was too tempting to pass up. I decided to make the trip a real treat by taking the Ford GT, but little did I know the roads in West Los Angeles, specifically Sunset Boulevard through Beverly Hills and Cheviot Hills, were on par with the roads in 3rd world countries.

Seriously, the GT was bouncing and banging along and it occurred to me the road quality was more akin to something from a war-torn country than premium zip codes in the nation’s second-largest city.