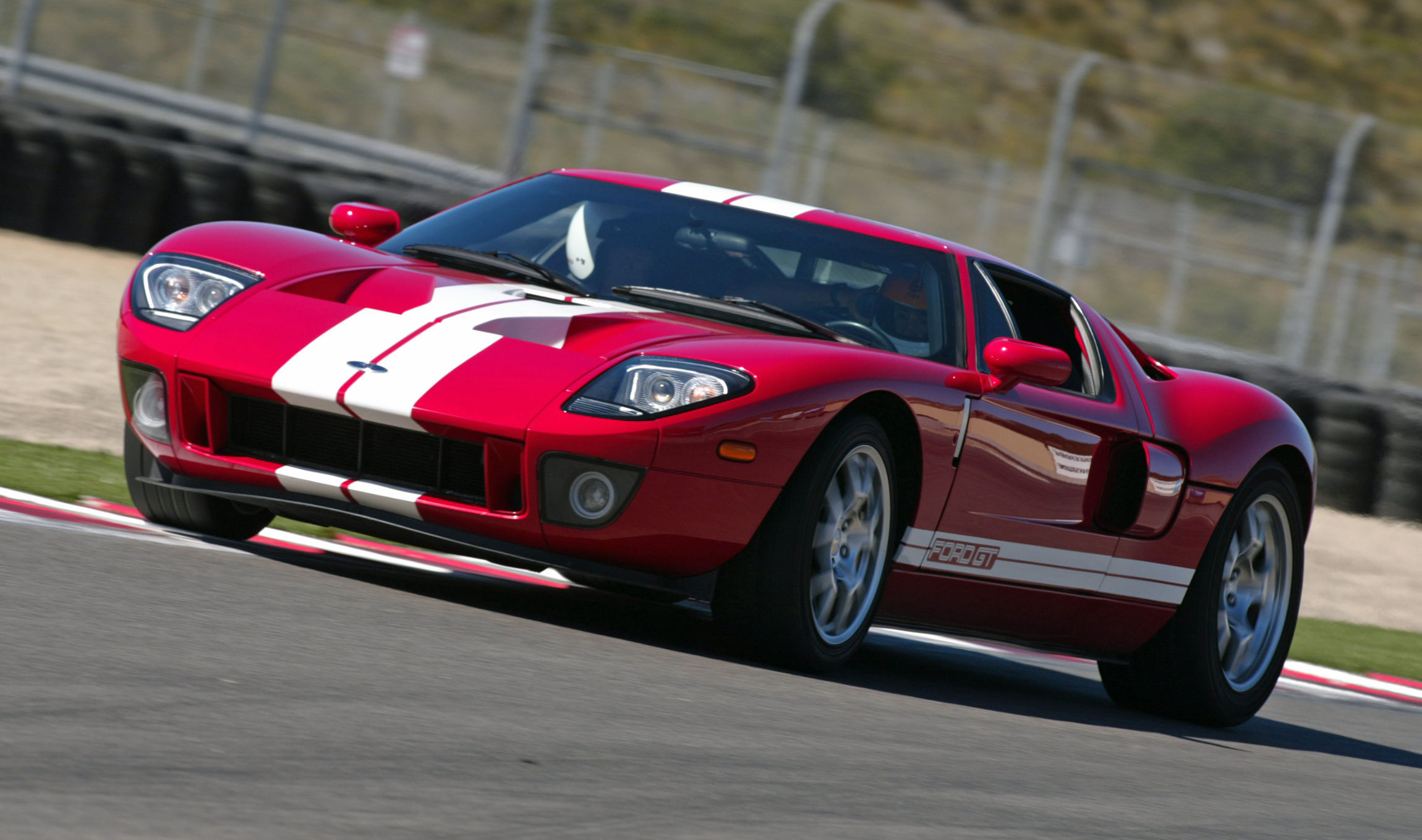 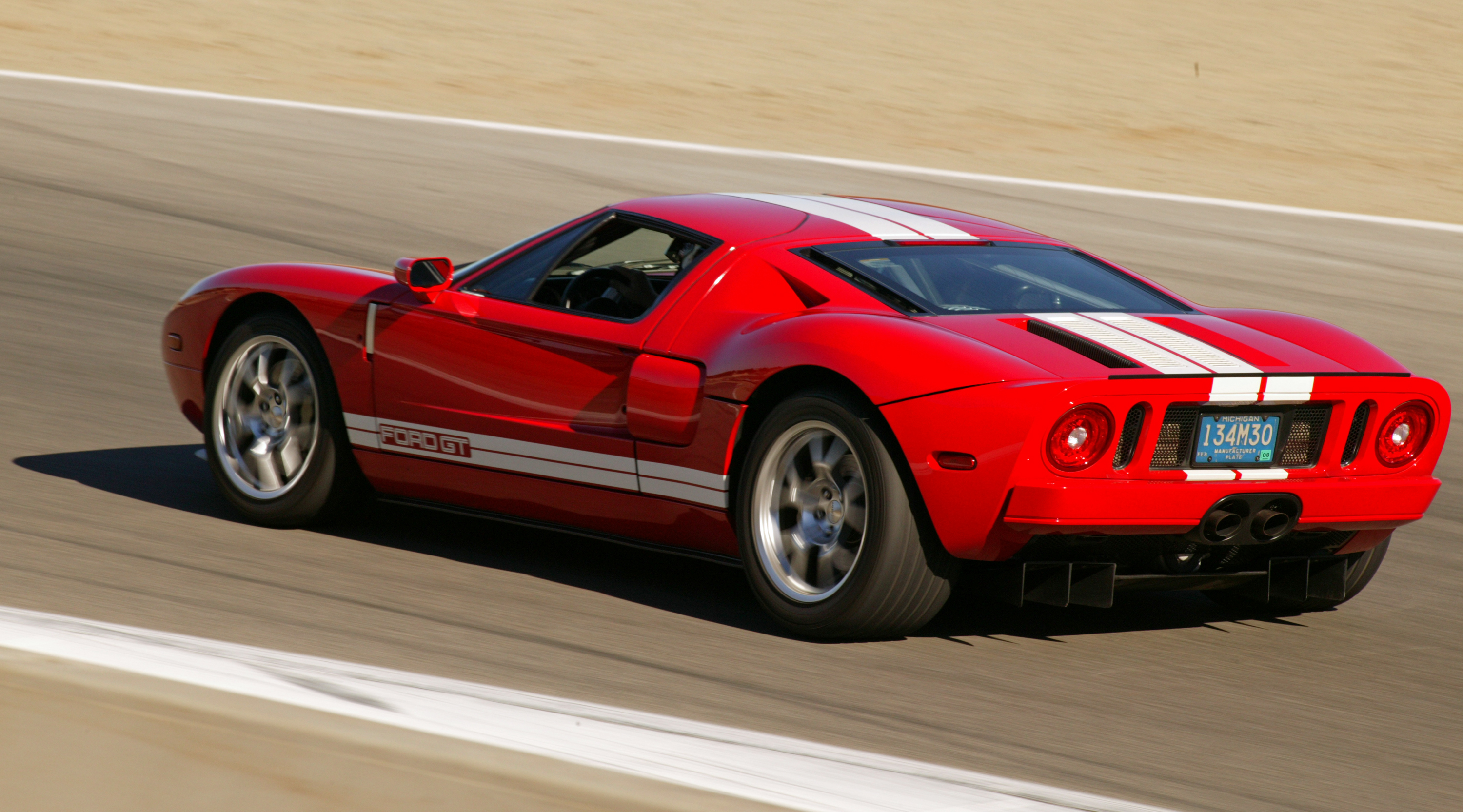 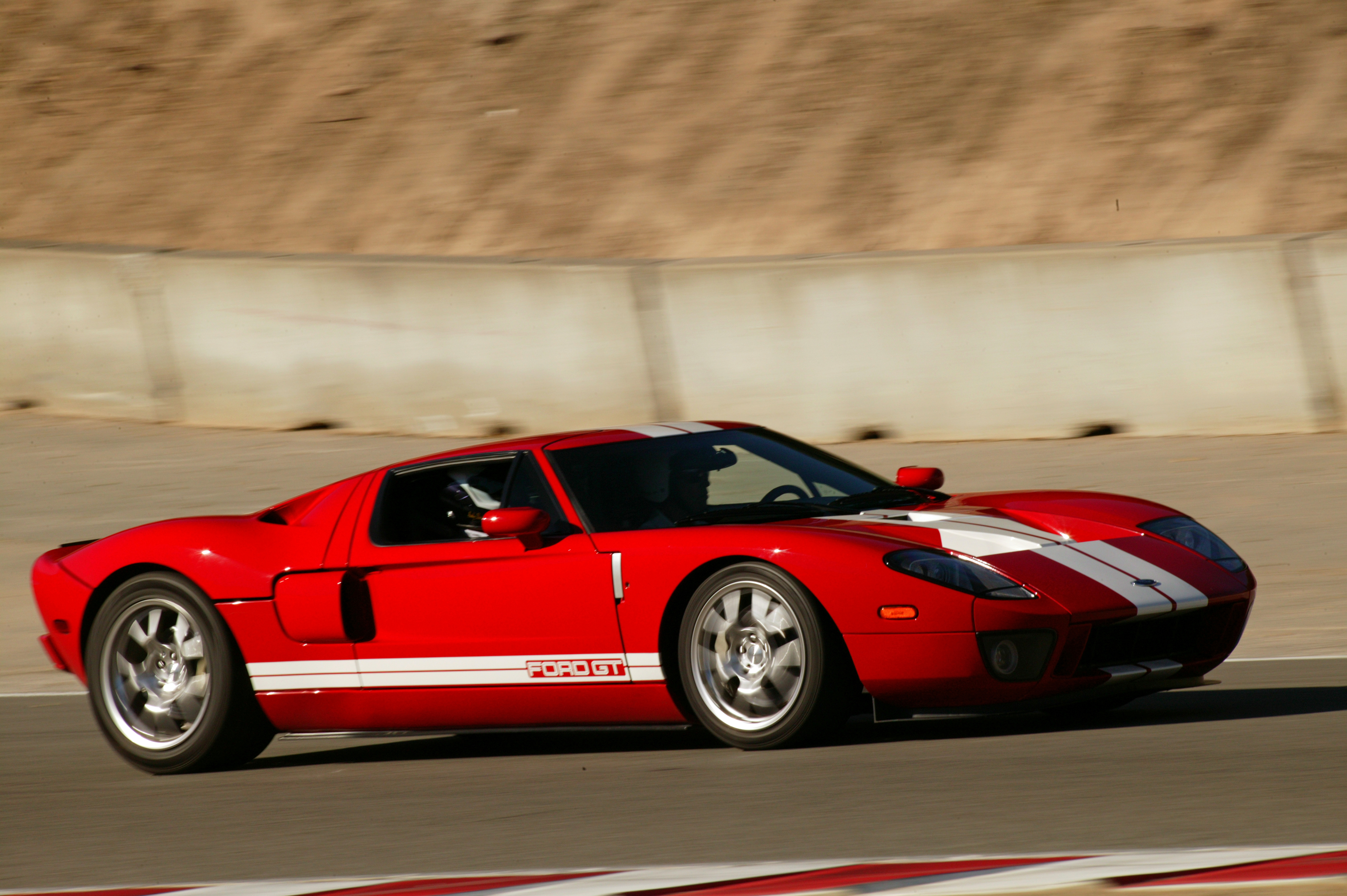 2005 Ford GT during the “reality” portion of the our testing

The Cars
That was the question we decided to answer by bringing five of today’s hottest cars to Mazda Raceway Laguna Seca in California. Beyond the Ford GT we discussed in our Introduction we hauled out a Dodge Neon SRT-4, Ford Mustang GT, Mazda RX-8 and Mitsubishi Lancer Evolution RS. This gave us a wide spectrum of drivetrain layouts (rear-wheel drive, front-wheel drive, all-wheel drive) and engine designs (supercharged V8, normally aspirated V8, turbocharged four-cylinders and a rotary). It also gave us three front-engine cars (Evo, Mustang and Neon), one midengine car (GT) and one front midengine design (RX-8).

The Players
We also brought out a wide spectrum of driving “talent.” Beyond yours truly (sporting a few driving school experiences and approximately two months of owning a PlayStation2 and Gran Turismo 4), we rounded up Justin Kaehler, an editor from www.IGN.com. Justin has regular access to both a Sparco Racing Cockpit Pro seat and the GT4 force feedback steering wheel that we used for our “virtual” cockpits in Laguna Seca’s infield. But Justin admitted to not being a hard-core GT4 player. Finally, we wrangled the skill set of AJ Allmendinger, a professional racer on the Champ Car circuit who was Rookie of the Year in 2004. He told us he didn’t play GT4 much because he liked to race head-to-head against several opponents. However, he said he was a major PC online racer, and thought he was well versed in transferring his real-world skills to the world of pixels and plastic steering wheels. Uh-oh….

All drivers were allowed four laps per vehicle on Gran Turismo 4 to establish their best “virtual” time, followed immediately by three laps in the real-world version of the same car. Beyond the drivers mentioned, we also had GT4’s creator on hand, Kazunouri Yamauchi. Between his real-world laps around Laguna Seca in the Ford GT we spoke to him about the creation of GT4.

Dodge Neon SRT-4 ACR
We decided to start with the “easier” cars first, and build up to the hypersonic Ford GT. With front-wheel drive and four doors, we figured the Neon would be the best car for learning Laguna’s tricky line. Its front end wanted to plow when pushed to its limits but don’t think of the SRT-4 as a slow economy car. It was hitting over 103 mph on the front straight…when AJ drove it. I managed 97.4 while Justin topped out at 77 mph. In Justin’s defense he really was driving Laguna Seca for the first time ever. Both AJ and I had driven it previously.

All of our lap times on Gran Turismo 4 were faster than our real-world times. Mine by about 5 seconds, AJ’s by about 9 seconds, and Justin’s by about 11 seconds. Of course, AJ’s virtual and real-world lap times were both faster than any of Justin’s or mine. This would become a trend throughout the day. 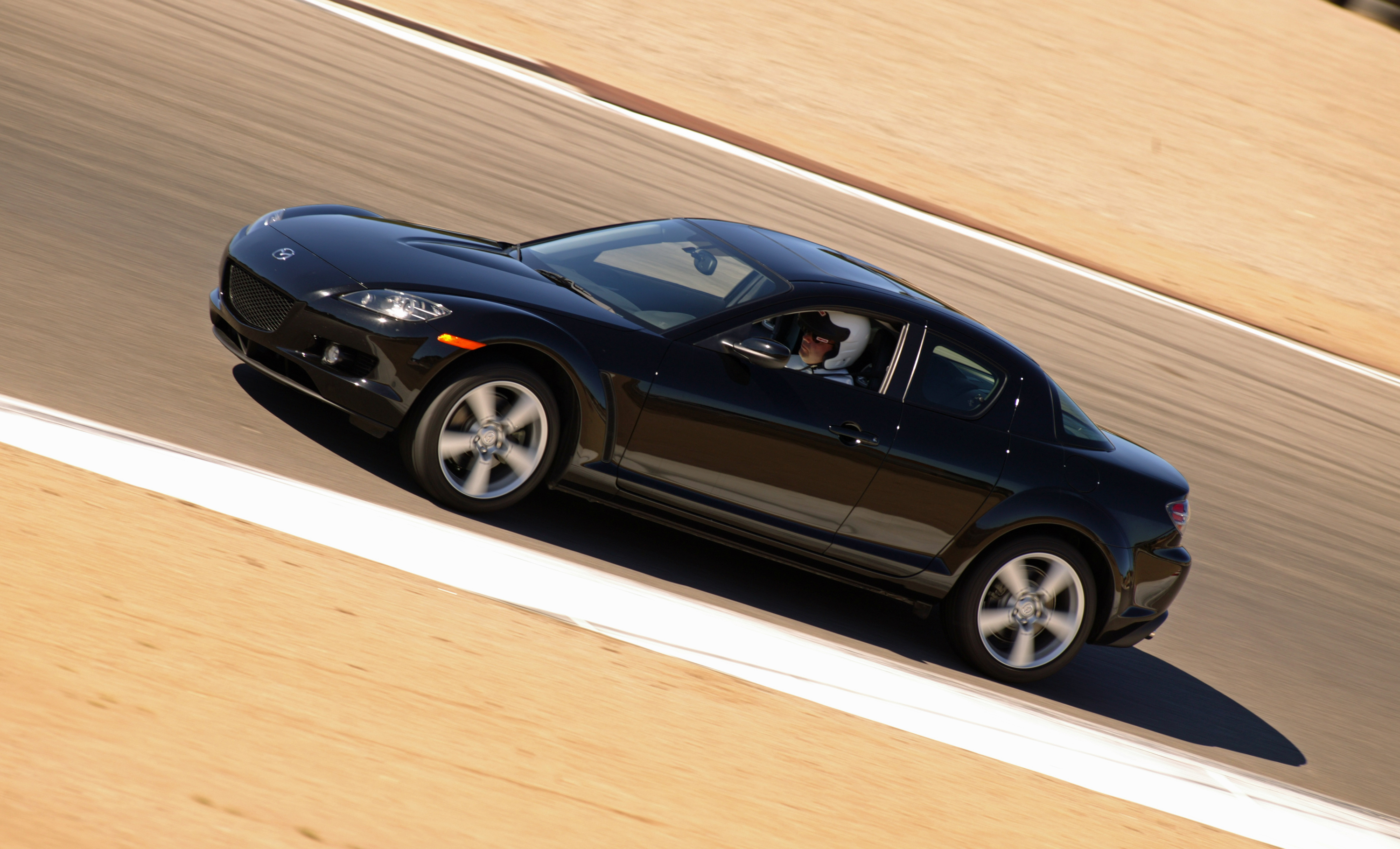 Mazda RX-8
Switching to the RX-8 meant going from front- to rear-wheel drive. It also meant going from a turbocharged, 220-horsepower four-cylinder engine to a normally aspirated, 238-hp rotary engine. The real difference between these cars was torque, as the rotary maxes out at 159 lb-ft while the Dodge manages 245 lb-ft (at an easily accessible 2,400 rpm). Both cars weigh within 100 pounds of each other (approximately 3,000 pounds), but the strategy for getting a fast lap was vastly different. Basically, you had to get the RX-8 up to speed and hold it there by carrying higher cornering velocities, while the Dodge had to slow down in the corners and quickly get back up to speed on the straights — something the torquey, turbocharged engine made easy to accomplish.

And the results of these two vastly different design philosophies? Nearly identical lap times between the Neon and RX-8, whether virtual or real world, and whether driven by AJ or myself. Who woulda thunk the sporty Mazda and economy-car based Dodge would be nearly identical at a racetrack? Once again AJ was the quickest — both on and off the track. Justin was actually a bit quicker in the RX-8 than the Neon, likely because his familiarity with the track was still increasing.

Mitsubishi Lancer Evolution RS
One thing became very clear after getting into the Evolution: I need to get into Evolutions more often. What a fabulously fun car! AJ, who got his first seat time in an Evolution during this event, had a similar reaction. The car is as easy to drive as the RX-8 in terms of balance and “fling-ability,” yet it’s infinitely more powerful. The Evo’s 276 hp doesn’t sound like a big advantage over the RX-8’s 238, but with 286 lb-ft of torque on tap (127 more than the RX-8), as well as the cornering traction provided by all-wheel drive, this car defined the term “pocket rocket” as it blasted around Laguna Seca.

Lap times confirmed what my neck muscles were telling me, as I shaved 6 seconds off the RX-8/Neon lap times while driving the Evolution. In the virtual world I was 9 seconds faster in the Evolution. AJ was also approximately 6 seconds faster in the Mitsu (both in GT4 and the real world), while Justin upped his real-world lap times by 5 seconds over the RX-8 (and 9 seconds over the Neon). This is easily the most entertaining track car you can buy for less than $30,000. 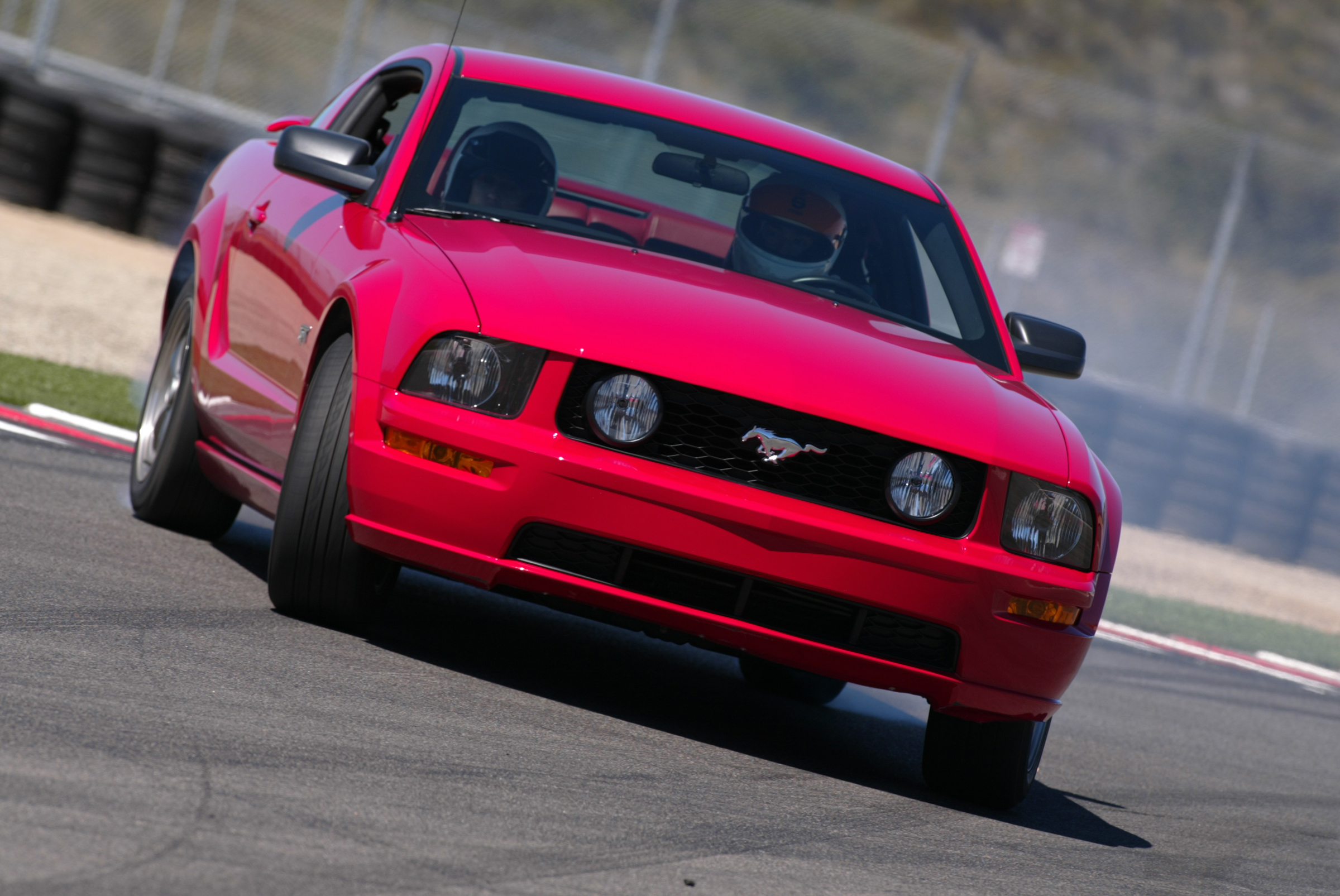 Ford Mustang GT
The Mustang was the first car where I felt that the virtual driving experience was truly hampered by a lack of vehicle feedback. The combination of tractable horsepower and innocuous driving dynamics made it relatively easy to drive the Neon, RX-8 and Evo around a virtual Laguna Seca, even with little more than the occasional vibration through the “force feedback” steering wheel. But with the Mustang’s 300 hp and 320 lb-ft of torque twisting the rear wheels, things suddenly got very hairy in virtual land. Watching my laps in “replay mode” I never executed what I would call a clean line around the track. Probably because I felt like I could never really tell what the car was doing…until it was too late (hey, that’s what virtual tire walls are for).

On the flipside, the new Mustang (in the real world) provides incredibly solid feedback through the steering wheel and brake pedal. This made wringing the most out of it on the track not only fun, but also relatively easy. It also sounded cool, looked cool and could readily be put into a four-wheel drift whenever you felt more like looking fast than going fast. It’s so not a 1978 Fairmont anymore — thank goodness. 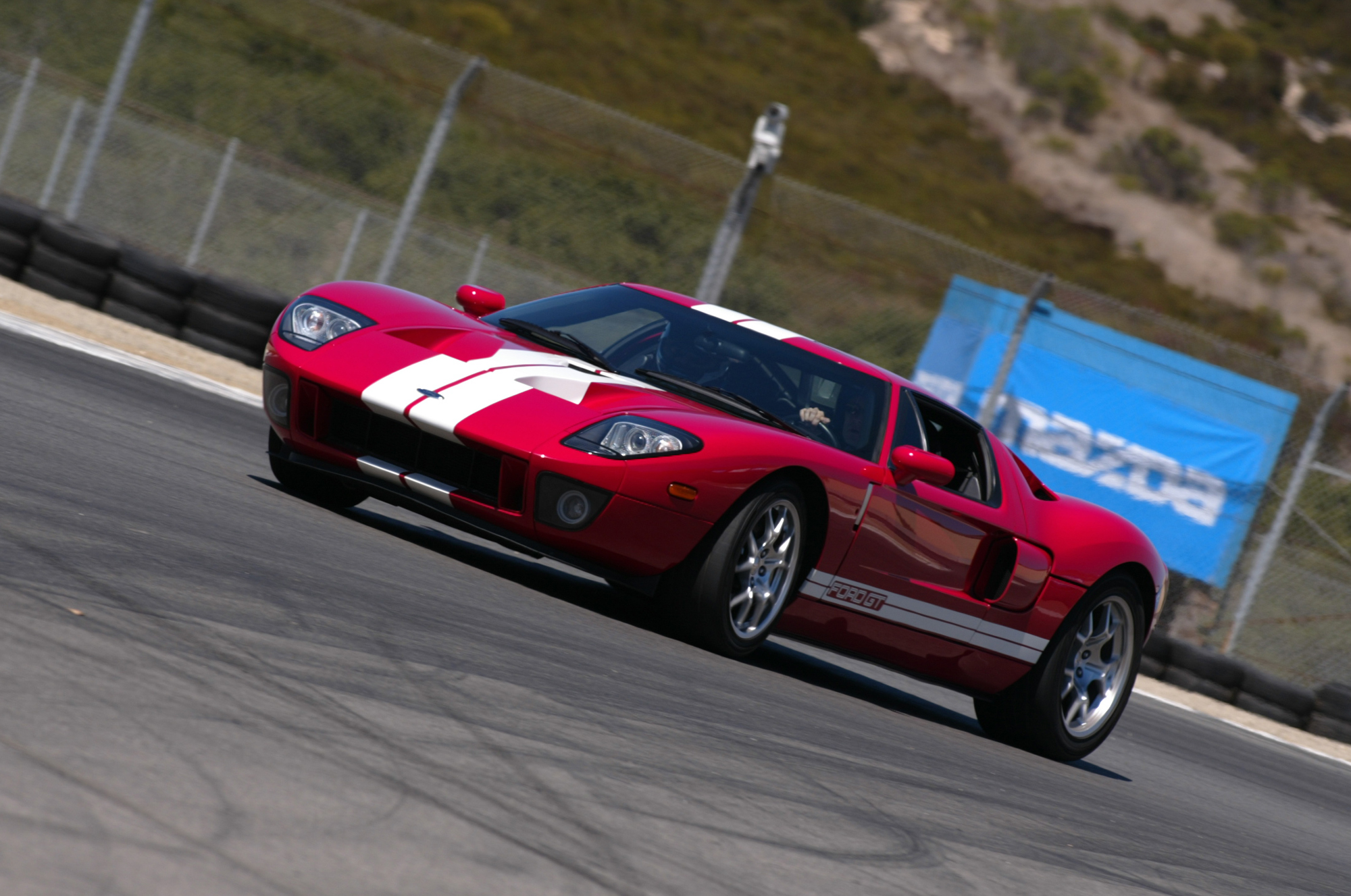 Ford GT
After 16 virtual laps — and 12 real-world trips — around Laguna Seca I was ready for the “big time” (at least I hoped I was). The Ford GT makes almost twice the horsepower (550) compared to the next most powerful vehicle in this group, and it costs over five times as much as any of them. I’m pretty sure that second element had a greater influence on my real-world lap times….

Like the Mustang, the Ford GT was actually harder to drive in Gran Turismo 4 than it was on the real track. With all that weight behind you (remember, it’s the only midengine car in this test), you really need to know exactly what’s going on with the vehicle at all times. In the real world you can actually use that weight to your advantage when setting the car up for a corner. Trail brake going in to bring the back around, ease off the brake pedal when the nose is pointed where you want it, and squeeze onto the throttle as you clip the apex. The GT’s massive tires and communicative steering give it a predictable nature at the limit, so even with a $150,000 price tag you can confidently slide it around a racetrack. In the game world the GT was constantly getting out of sorts on me because, like the Mustang, I couldn’t consistently tell where my cornering or braking threshold was…until it was too late.

Of course confidence is a relative thing. While my GT laps were far “cleaner” in reality than they were in Gran Turismo 4, I had a bit of a problem with the front straight in the real world. As previously mentioned, I simply couldn’t stay on the throttle all the way to the braking zone for Turn 2. In the game I was hitting close to 140 mph before slowing down on the front straight, but in reality I chickened out at about 105 mph — which was just before the crest over a blind hill that could make the GT feel very “light” for a second or two. AJ was hitting 115 mph and Justin topped out around 97 mph. Once again, on a track like Laguna Seca your ability to maximize the longest straight is key to pulling good lap times — as these figures confirm. 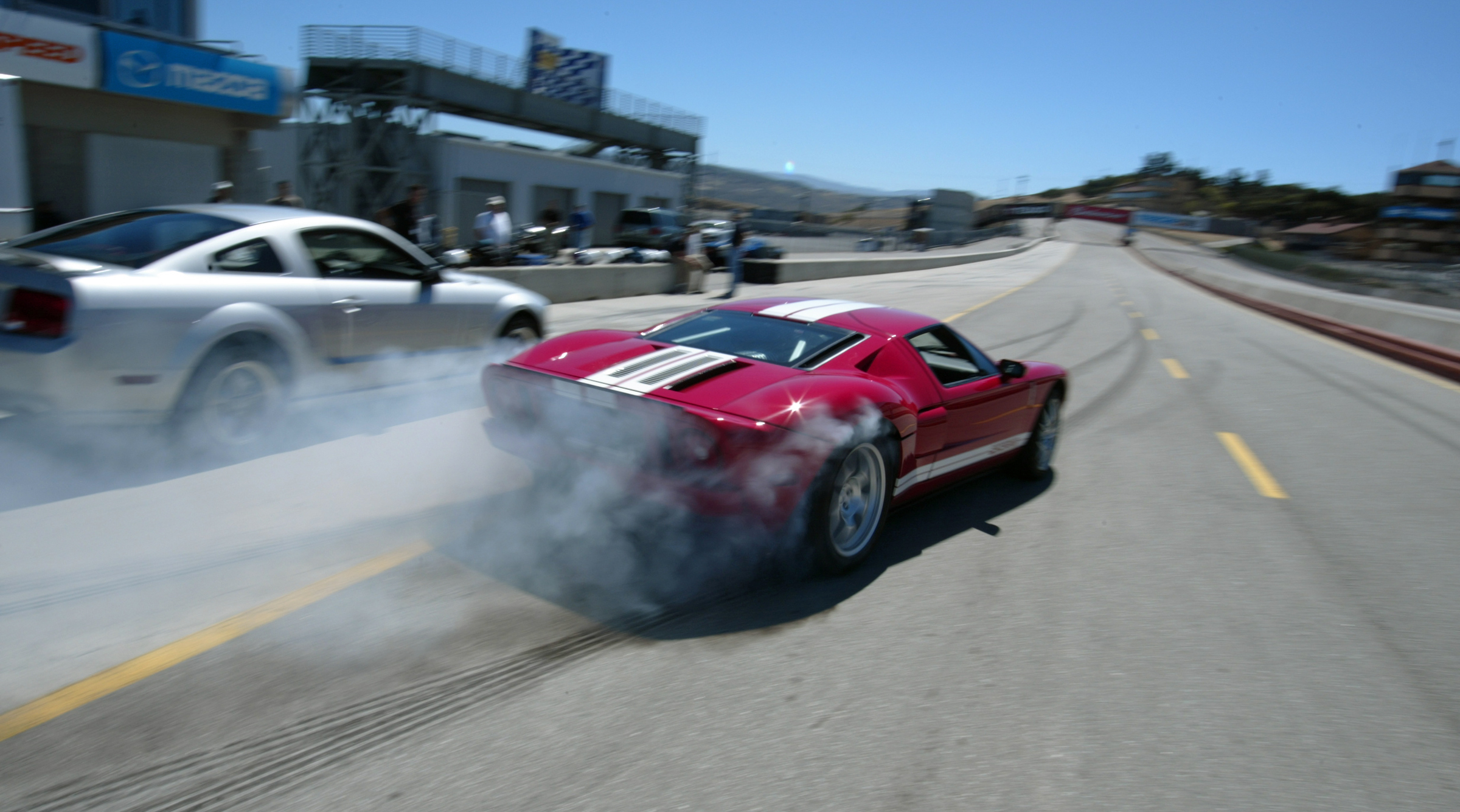 2005 Ford GT doing what it does best at Laguna Seca

What Does It All Mean?
So did we learn anything from this test of reality versus virtual reality in the racing world, or was it just an excuse to drive a bunch of cool cars around a great track? Yes to both, but I think the obvious conclusions are:

“Yes, Karl,” they replied, “you were the most consistently slow.”

Hmmm, somehow it sounded better when I said it.