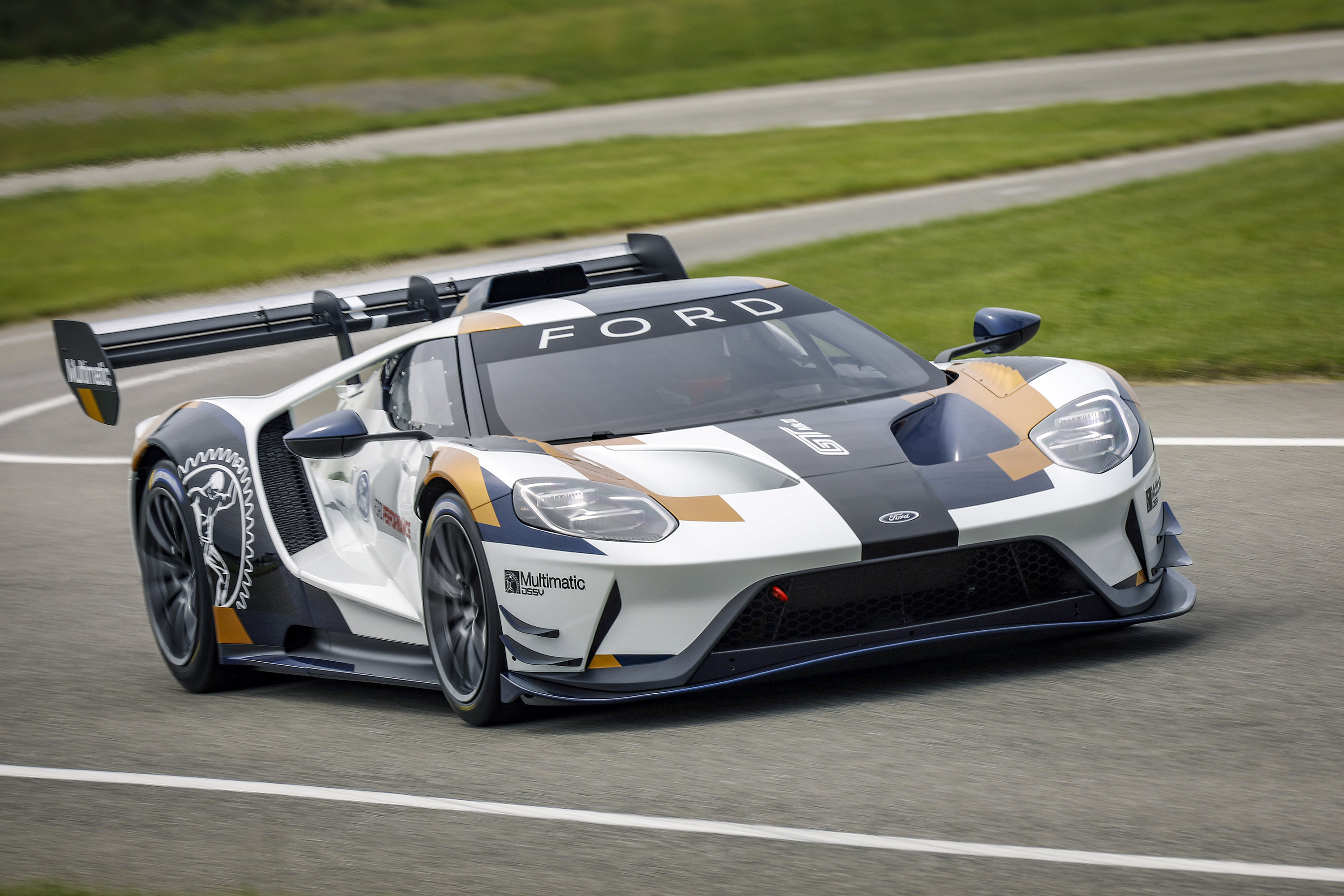 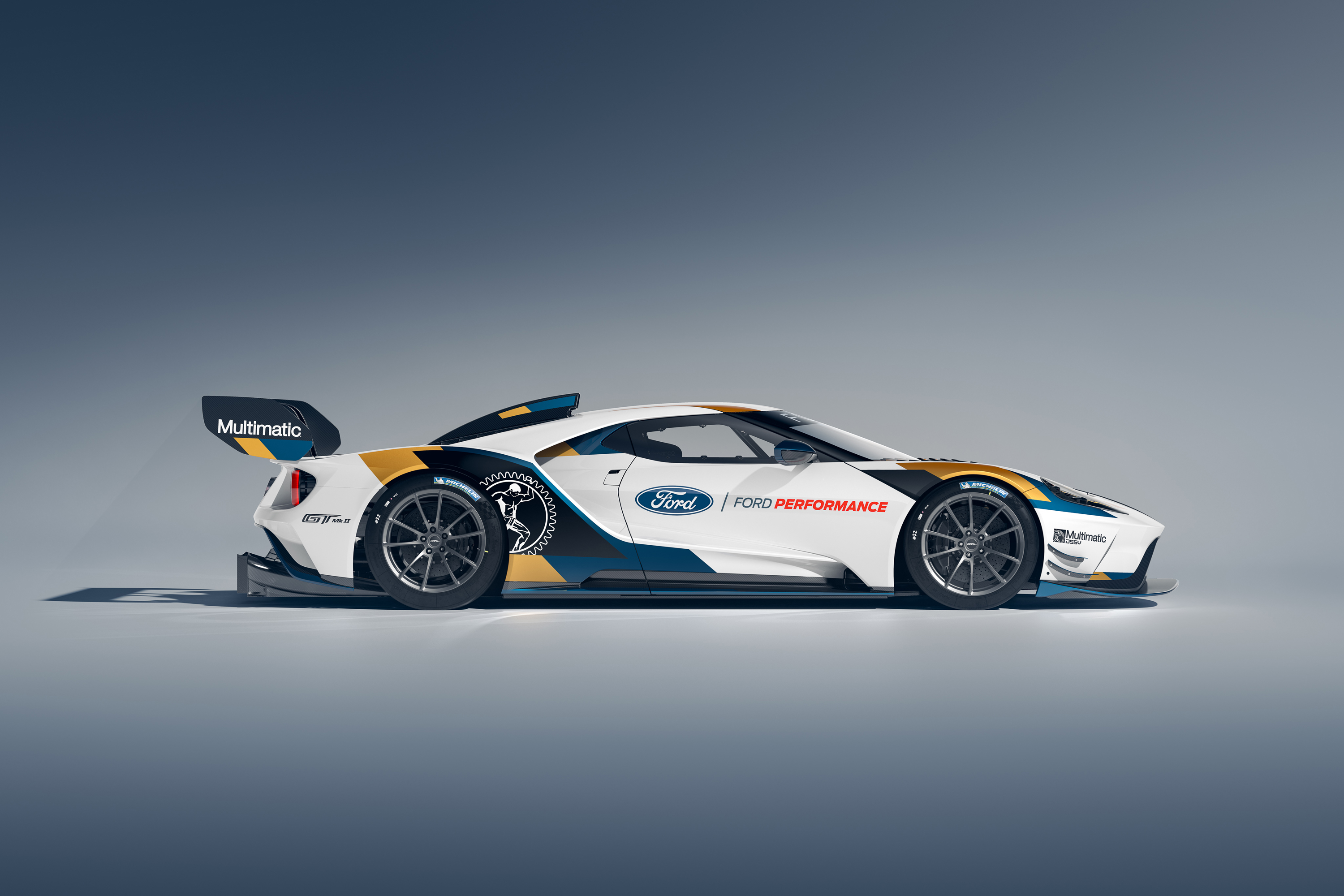 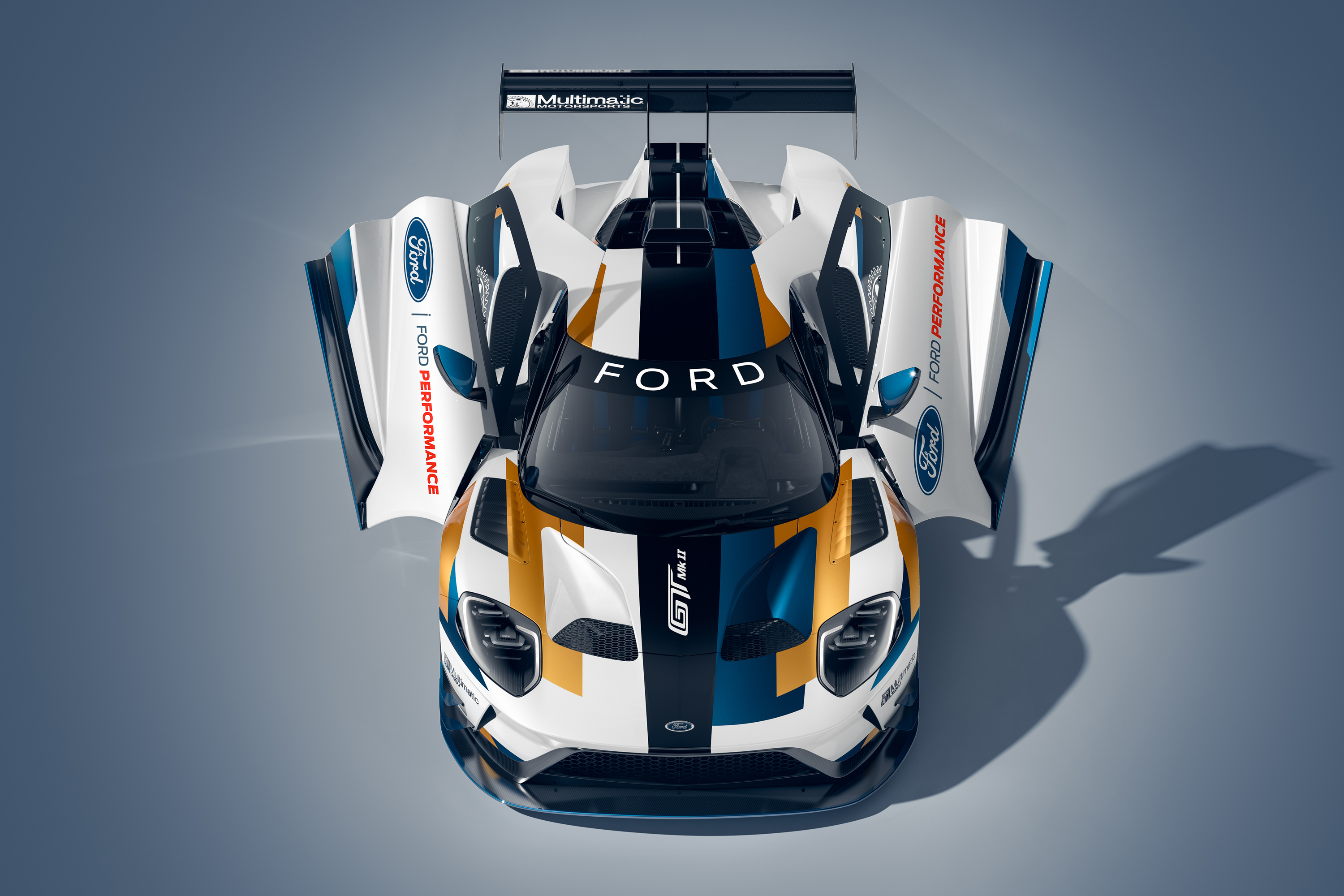 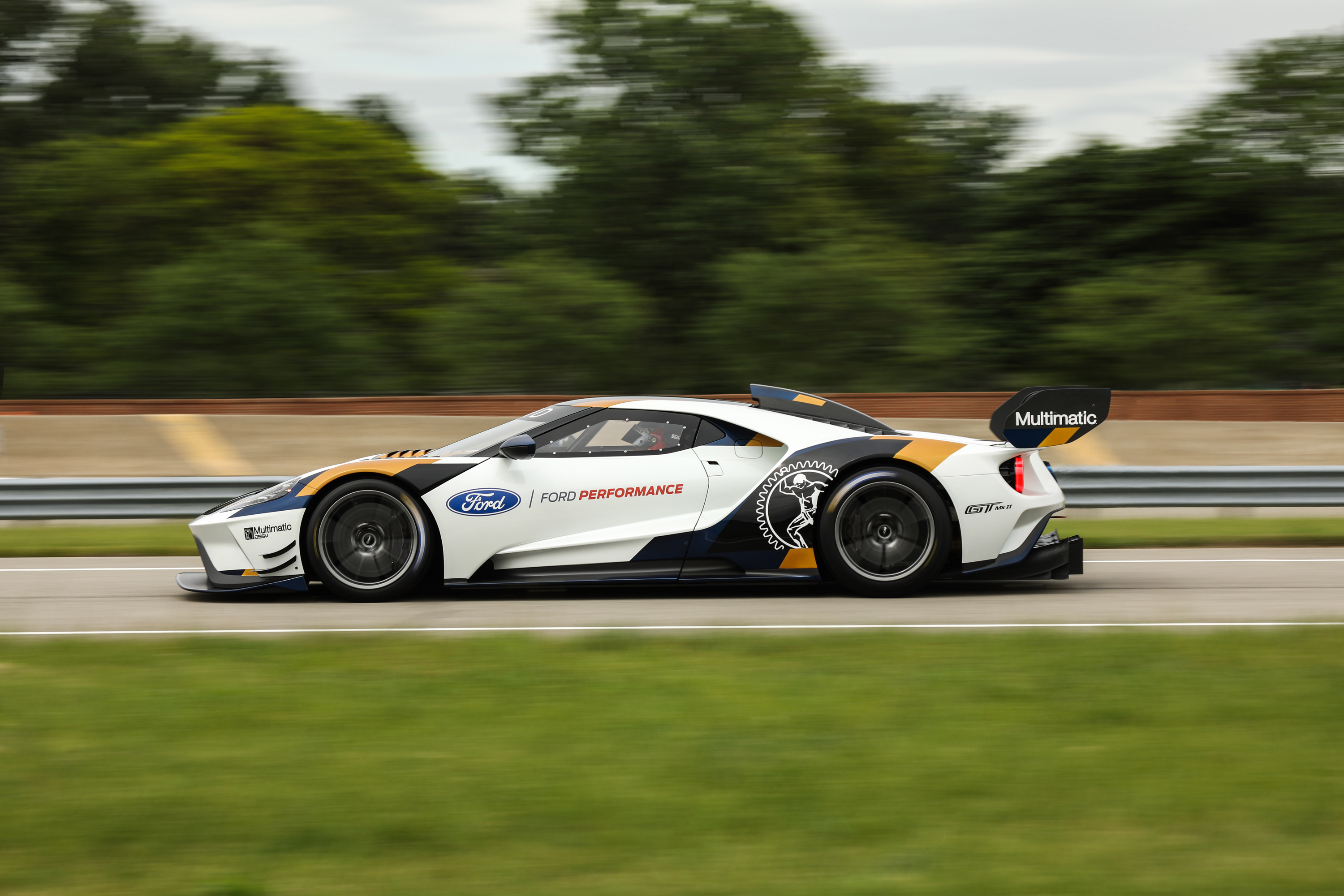 That’s exactly what the new Ford GT Mark II represents – a Ford GT engineered to take full advantage of the GT’s inherent performance-oriented design. Hau Thai-Tang, Ford’s Chief Product Development & Purchasing Officer, described the Ford GT Mark II as “the ultimate expression of performance for the Ford GT. It combines all of the learnings we’ve had from our motorsports program, with Larry [Holt] and the Multimatic Team, without any of the restrictions of balance of performance. It really allows us to optimize every element of the vehicle.” 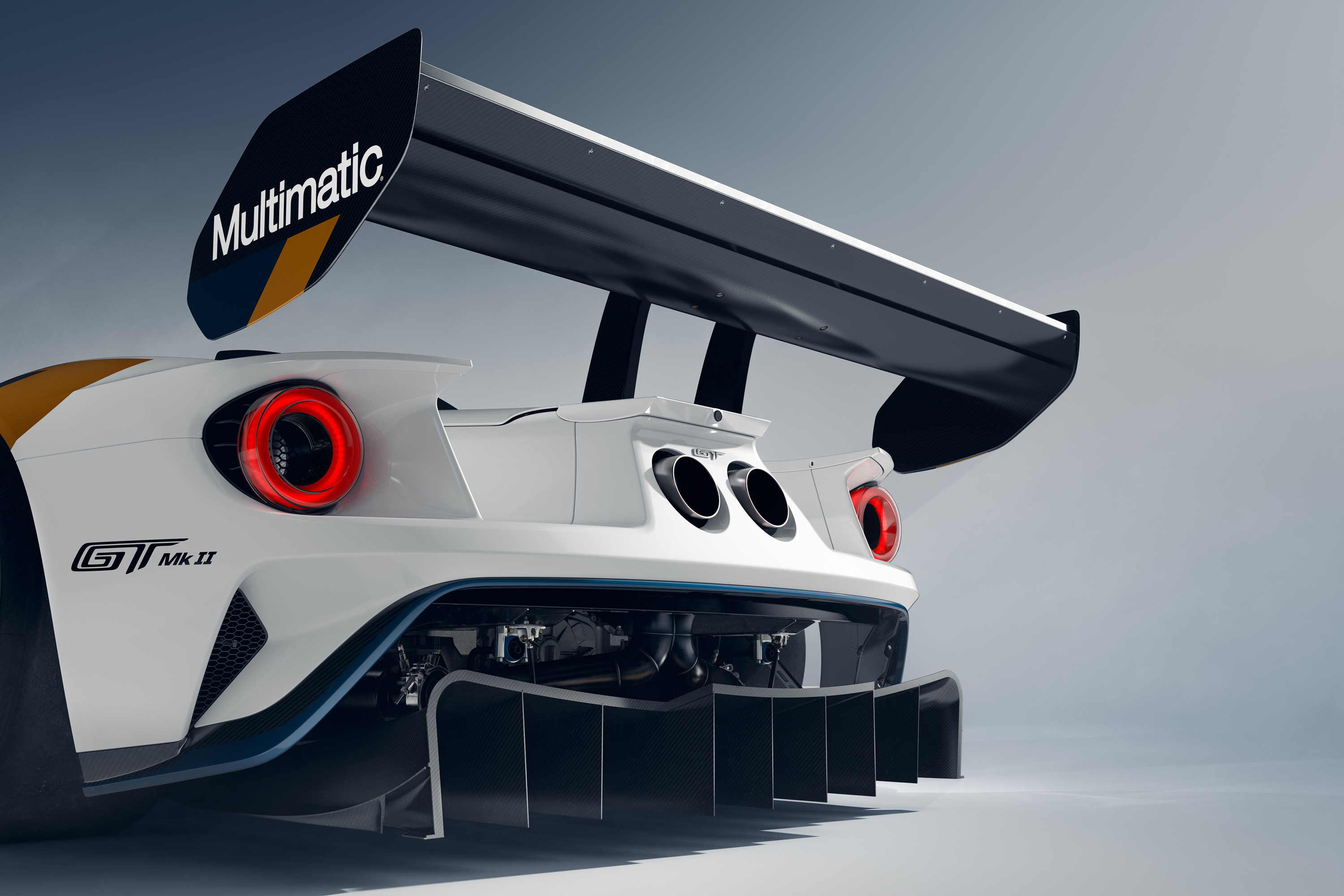 Multimatic’s Chief Technical Office, Larry Holt, was quick to note that while the street version of the Ford GT makes approximately 650 horsepower the race version, after balance of power restrictions, is limited to around 495 horsepower. Holt also noted the limitations on aerodynamics and downforce for the current race versions of the Ford GT, as well as the requirement to use steel, versus carbon ceramic, brakes. Everything from the size of the rear wing to the use of louvered front fenders (which reduces wheelhouse pressure and around 90 pounds of lift) is restricted in the current race versions of the Ford GT. 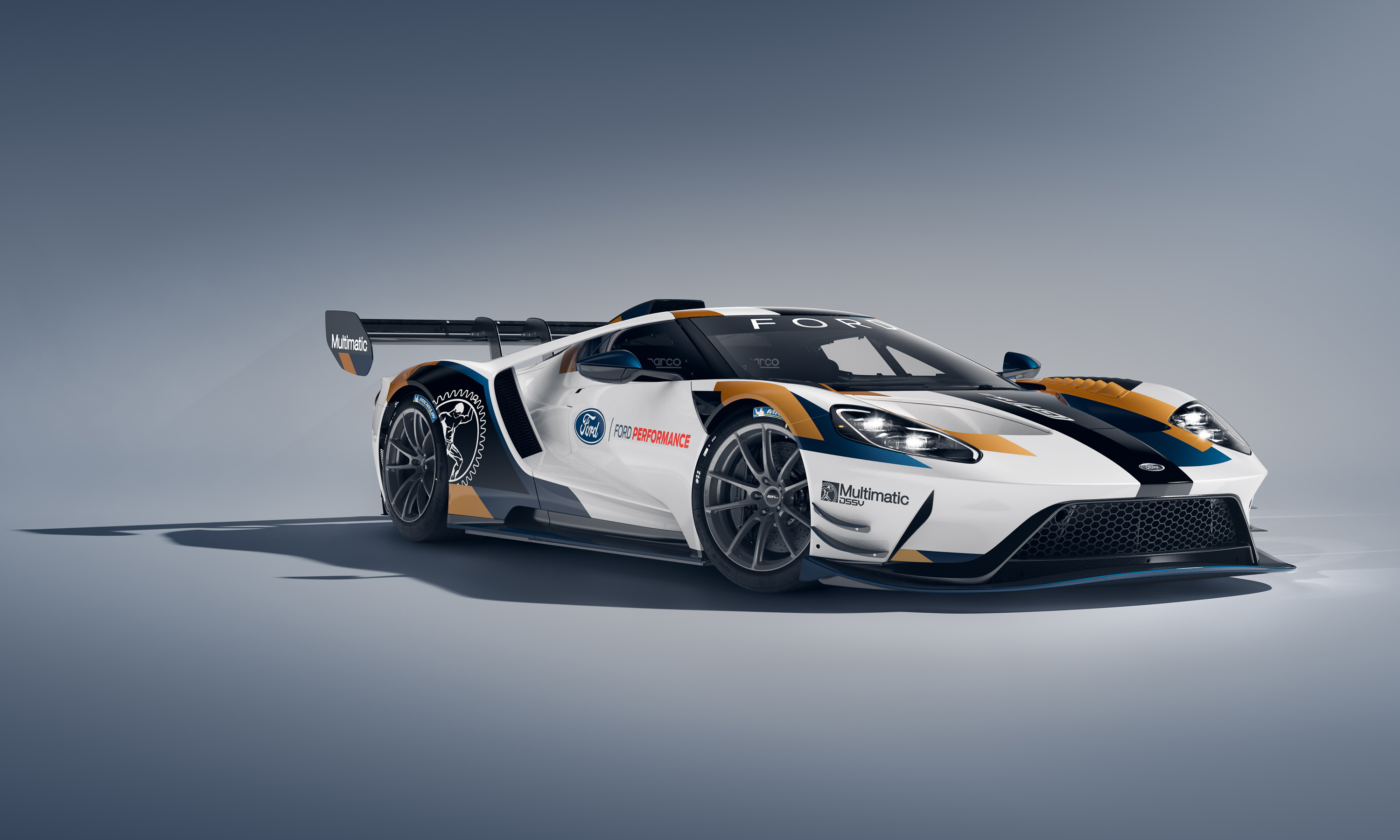 By contrast, the Ford GT Mark II holds nothing back. Starting with a body that screams “Race Track!” the Ford GT Mark II adds a duel-element fixed rear wing, louvered front fenders, a more aggressive “Evo” front splitter and larger “flicks” (dive planes) on the front corners. The car’s underbody panels are slightly (about .2 inches) higher than the GTLM car’s to reduce potential damage during the occasional “off” a Mark II customer might experience while exercising this Ford GT at a race track. All of these changes improve the Mark II’s downforce compared to the street or racing GT, giving it approximately 1,900 pounds of downforce at 150 mph. 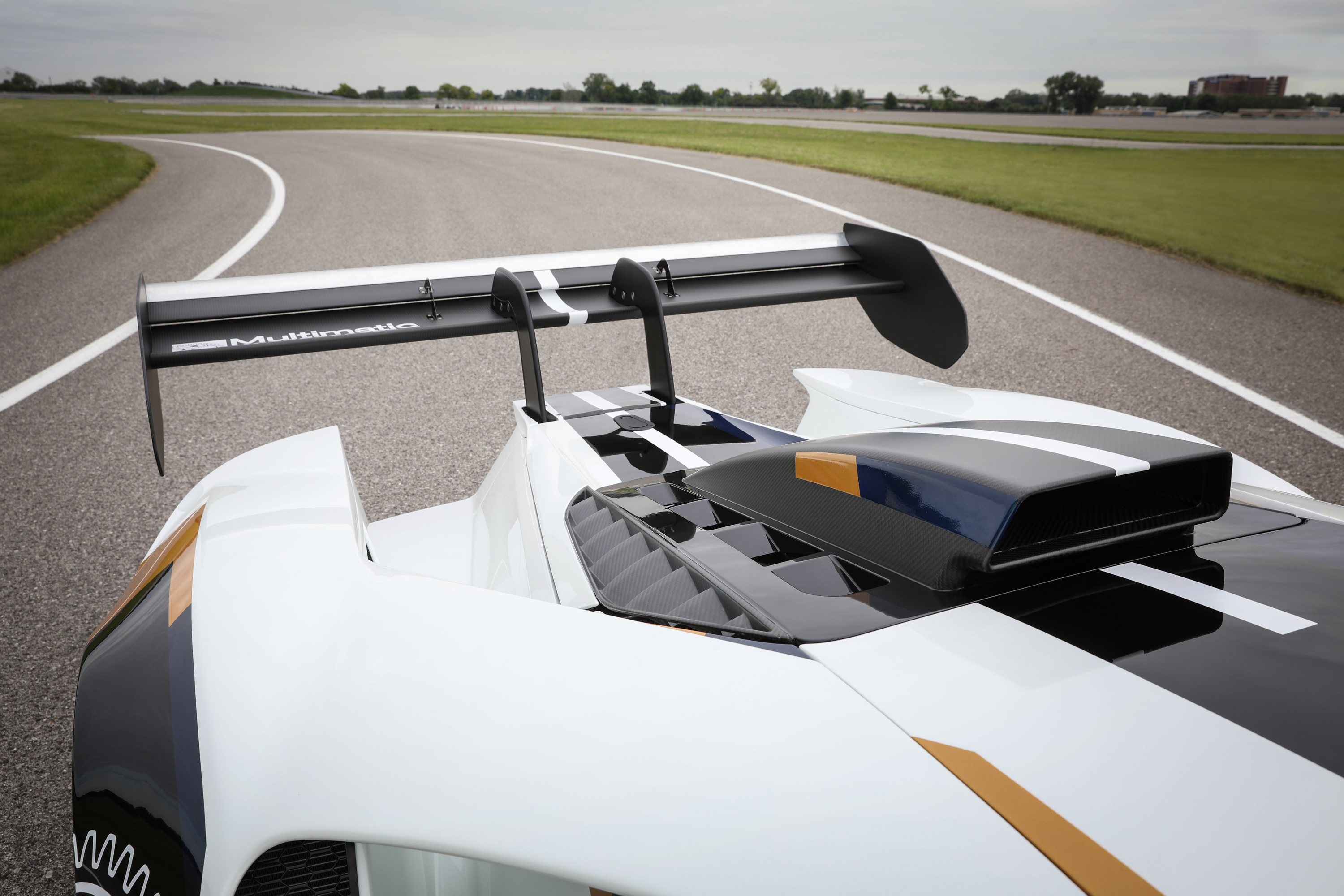 Another distinctive Mark II body element is the large scoop mounted at the rear of the roof. On GTLM race versions of the Ford GT this scoop helps cool the engine, but on the Ford GT Mark II this scoop feeds a transmission and oil cooler mounted where the road car’s (tiny) trunk is located. Additional cooling power comes from the Ford GT’s distinctive side (outboard) air coolers, which on the Mark II are even larger than the street or homologated race cars. These larger coolers also include an automatic water spray feature when engine temperatures hit a predetermined level, ensuring engine power remains consistent even under extreme use. 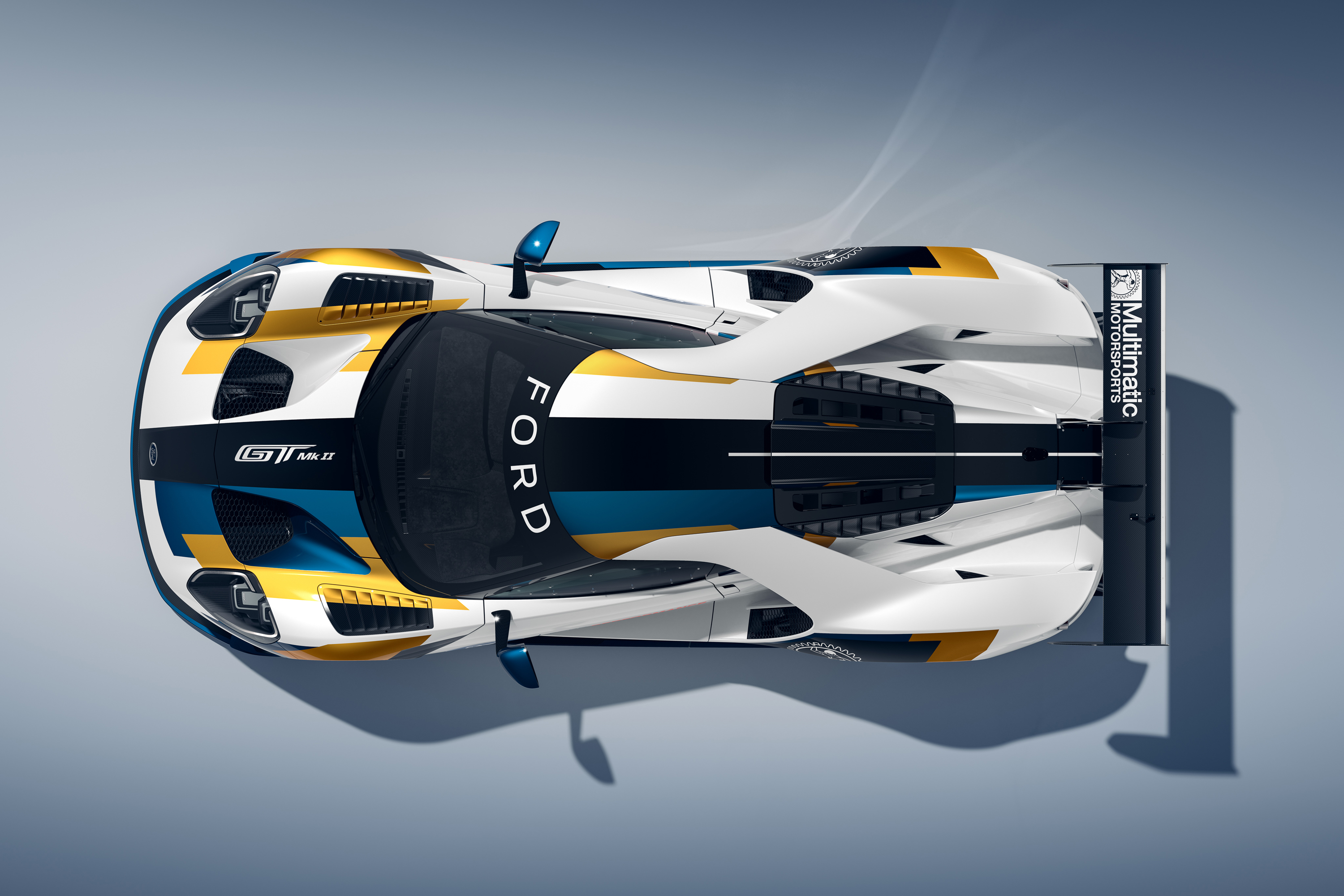 Speaking of power, underneath its more aggressive bodywork the Mark II features a revised drivetrain, with a 700-horsepower 3.5-liter EcoBoost V6. The twin-turbo V6 sends those 700 horses through a recalibrated Getrag dual-clutch transmission with a performance tune for quicker shifts. 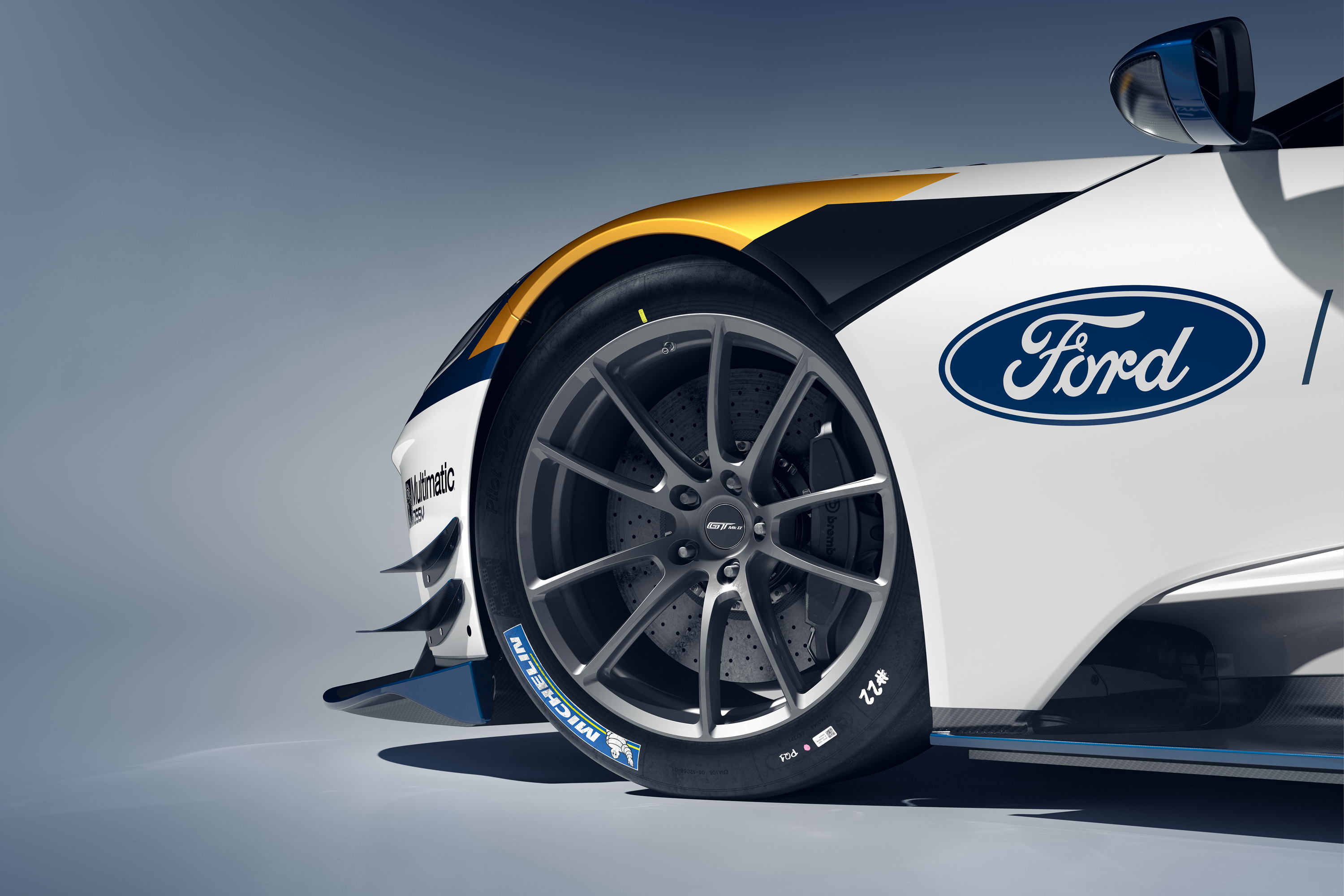 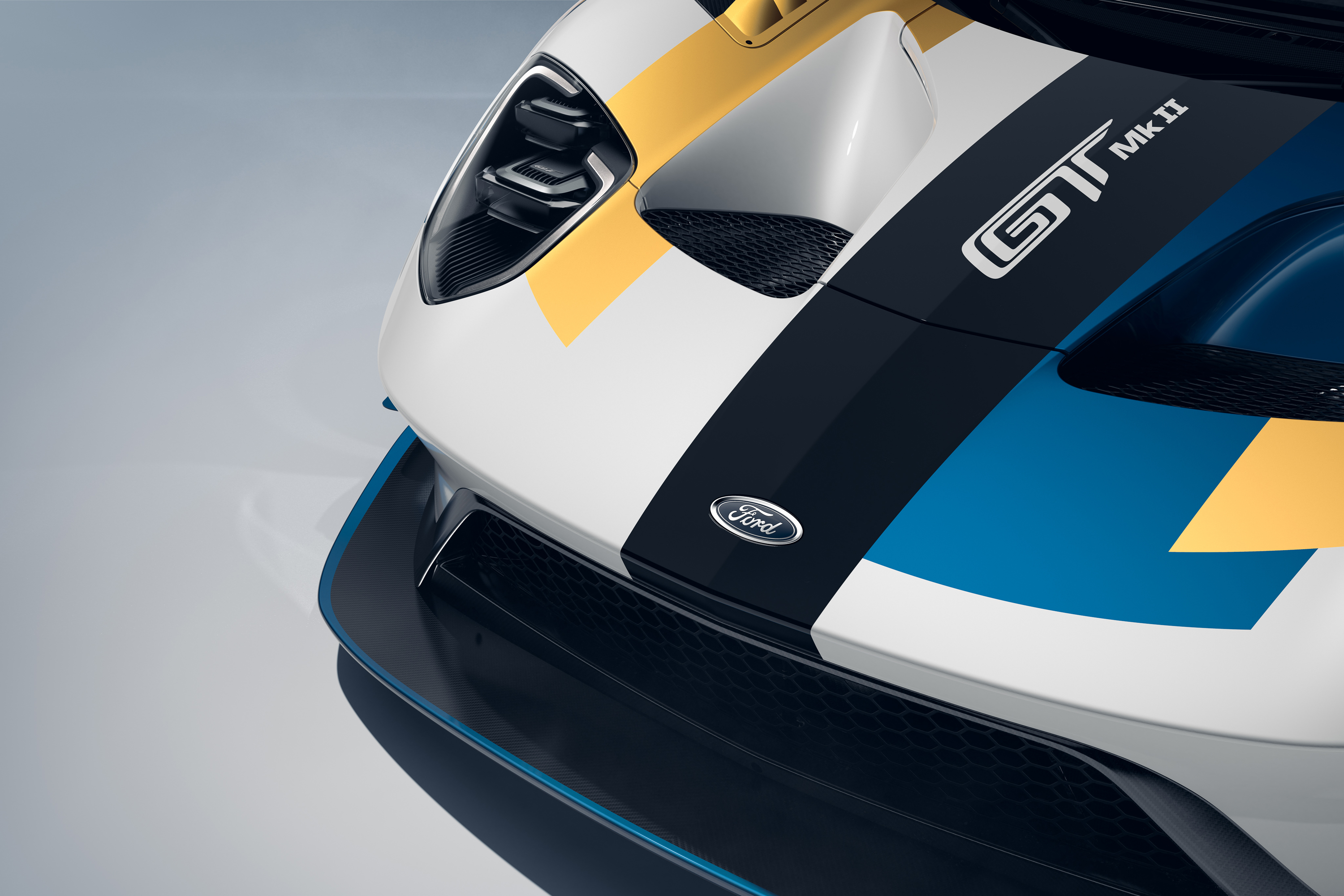 As a hand built, non-street-legal track weapon, Ford will only produce 45 Ford GT Mark IIs. These will be included in the car’s total 1,350-unit production run. Deliveries will begin in August of 2019 and continue through the car’s remaining production run, which ends in 2022.  The Mark II’s starting price is $1.2 million. Options include integrated air jacks to quickly and easily lift the car, plus just about any paint scheme or racing livery a buyer can imagine. 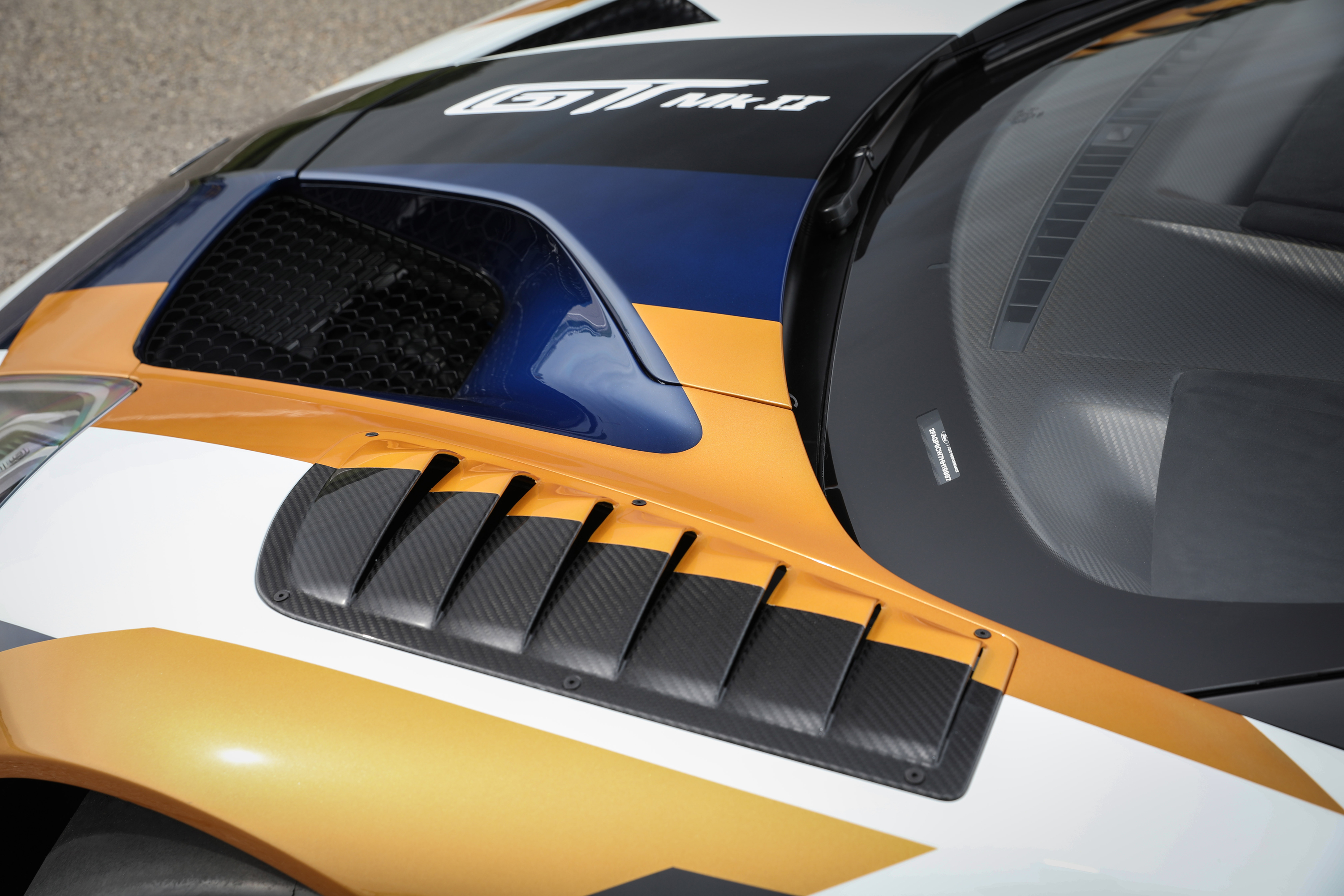 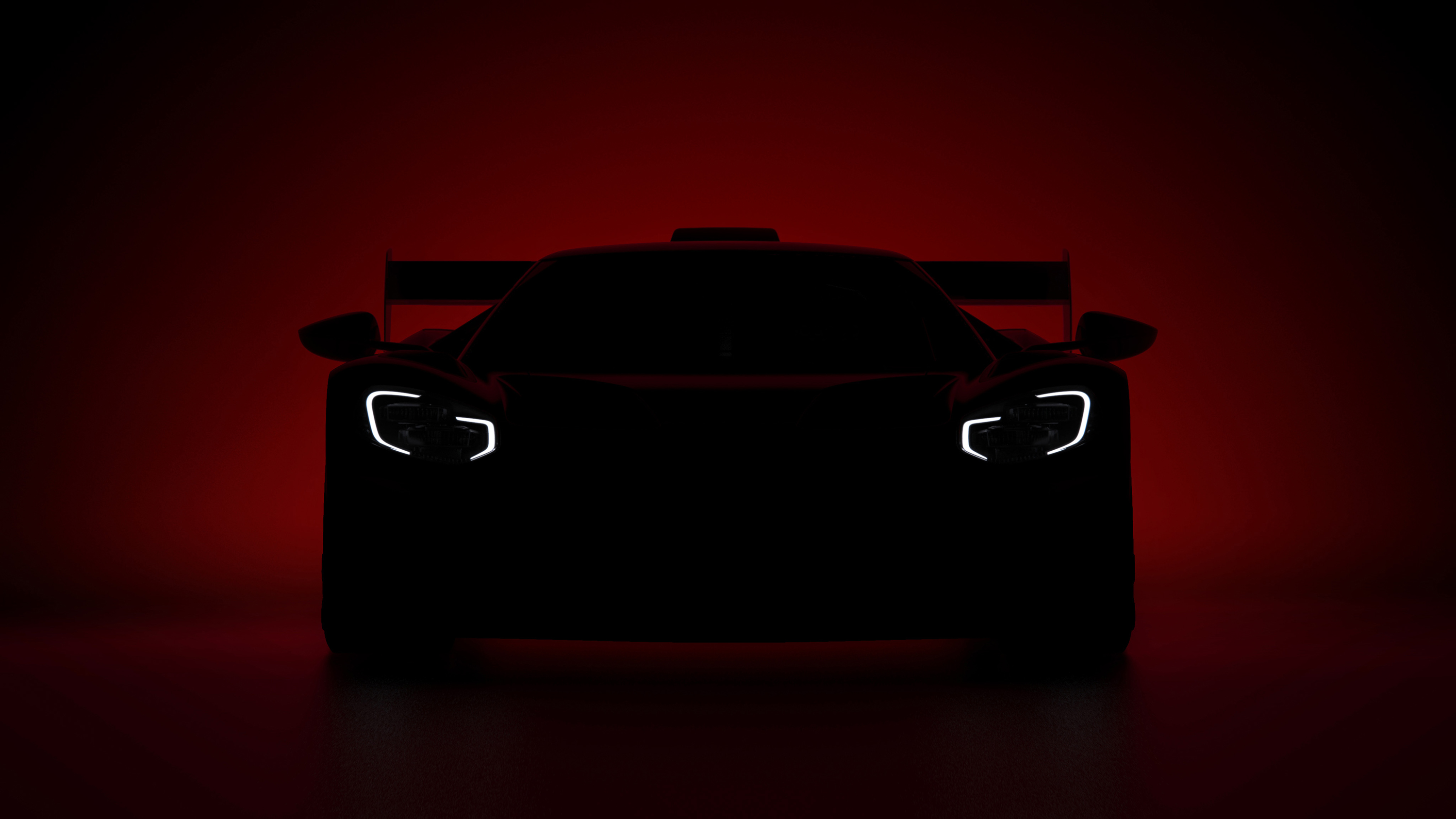 The Ford GT Mark II was teased, but even this image confirmed its track purpose